Get latest articles and stories on Sports at LatestLY. The spinner was not picked for the opening match which the hosts lost inside three days in Galle. 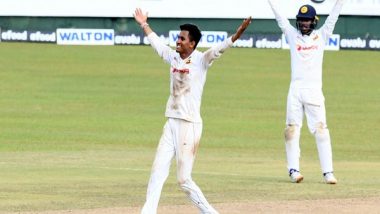 The spinner was not picked for the opening match which the hosts lost inside three days in Galle. "The player was found to be Covid positive when he was tested (Rapid Antigen Test) this morning, as he complained of feeling unwell," Sri Lanka Cricket said in a statement."Jayawickrama was immediately isolated from the rest of the team members and now will remain in room isolation for five days."

"Upon identification of Jayawickrama, the rest of the team members were subjected to a Rapid Antigen Test. All of them returned negative results," the release further added.

Earlier, veteran Sri Lanka all-rounder Angelo Mathews was ruled out of the Galle Test against Australia after testing positive for COVID-19 on Friday.

Also Read | What is BazBall? Know All About England's New Approach to Test Cricket Under Coach Brendon McCullum.

The rest of the Sri Lankan team players have returned negative results with the hosts looking to level the series in the final match against Australia starting Friday. (ANI)