Thiem won the first set after coming from 5-2 down in the tiebreaker, saving two set points in the process. 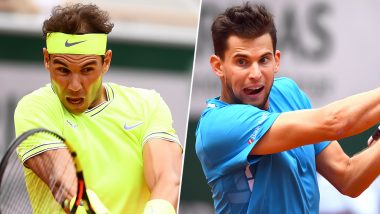 London, November 17: Dominic Thiem mastered the tiebreakers again to get the better of Rafael Nadal, beating the 20-time Grand Slam champion in straight sets on Tuesday for a second win at the ATP Finals.

Thiem clinched a 7-6 (7), 7-6 (4) win on his fifth match point in their first meeting since the Australian Open quarterfinals in January, when the Austrian player prevailed after winning three tiebreakers in a tight four-set match. Also Read | Uruguay vs Brazil Live Streaming Online 2022 FIFA World Cup Qualifiers CONMEBOL: Get TV Channels to Watch in India and Free Telecast Time in IST.

The U.S. Open champion opened group play in the season-ending event with a three-set victory over defending champion Stefanos Tsitsipas on Sunday, and will be guaranteed qualification for the semifinals if Tsitsipas beats tournament newcomer Andrey Rublev in the evening match.

Nadal, who beat Rublev in straight sets in their opener, missed a chance to qualify with a match to spare and next will play Tsitsipas on Thursday with a semifinal place at stake. Thiem won the first set after coming from 5-2 down in the tiebreaker, saving two set points in the process.

There was high-quality shot-making throughout the match, but not least when Thiem produced two inside-out forehand winners in a three-point span to close the tiebreaker — the first on set point for Nadal at 6-7 and then to clinch the set. Also Read | FIFA Cancels 2021 U-17 Women’s World Cup in India, Country To Host 2022 Edition.

After both players had their service broken in the second set, Nadal saved three match points when serving at 5-4 and 40-0 down. He won five straight points in that game, with one including a lob from a 'tweener that Thiem just managed to get back before Nadal powered a backhand down the line.

Thiem won three straight points to move 6-3 ahead in the tiebreaker. Nadal saved another match point but sent a tired backhand just wide to lose the match.