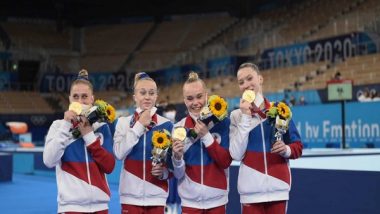 The U.S. women's gymnastics team were considered by some to be unbeatable going into the Olympic Games Tokyo 2020. But after team golds at both London 2012 and Rio 2016 - the Americans finished with silver after the withdrawal of Simone Biles following the first apparatus.

With the event going down to the final rotation, the brilliance of the gymnasts representing ROC shone through which helped them clinch the elusive gold.

Melnikova was clutch for the ROC, as she was the final gymnast to perform on the floor, easily scoring what she needed to confirm victory. The 2019 world all-around bronze medalist broke into tears after Olympic gold. (ANI)