Despite the tough competition for places at the London-based club, Sessegnon made 12 competitive appearances last season - three of which came in the Champions League. 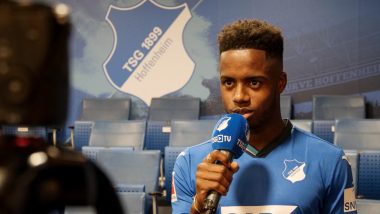 Hoffenheim, October 5: Hoffenheim on Monday announced that Ryan Sessegnon has joined the club on a season-long loan from Tottenham.

"Shortly before the close of the transfer window, TSG Hoffenheim have signed 20-year-old Ryan Sessegnon from Premier League club Tottenham Hotspur. The England U21 international joins the club on loan until 30 June 2021," the Bundesliga side said in a statement.

The Englishman made his debut for Fulham at the age of 16 and received acknowledgment for his strong performances when he became the youngest-ever played to be included in the "PFA Team of the Year" for the EFL Championship (second tier) in 2016/17. Jadon Sancho to Manchester United Transfer News Latest Update: Borussia Dortmund Star Spotted in UK Ahead of Potential Move.

Head coach Jose Mourinho brought him to Tottenham in the summer of 2019, where he signed a contract until July 2025. Despite the tough competition for places at the London-based club, Sessegnon made 12 competitive appearances last season - three of which came in the Champions League. He scored one goal and set up another during that time. After joining the German club, Sessegnon said the move will allow him to play in one of the best professional leagues in the world.

"TSG are all about successfully educating and developing young players. I'm hoping that the transfer will allow me game time in one of the best professional leagues in the world and I'm looking forward to the matches in a European competition," the club's official website quoted Sessegnon as saying.