A strong typhoon hurtled towards western Japan today, with forecasters warning of heavy rains and landslides, including in areas hit by deadly flooding last month. 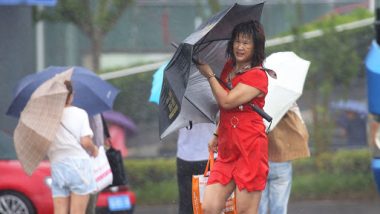 Typhoon Cimaron, with maximum gusts of 216 kilometres per hour, was around 280 kilometres southeast of the Goto islands at 2300 GMT Wednesday, the Japan Meteorological Agency said.

The typhoon is expected to make landfall late Thursday and head north through Friday morning, bringing intensifying rains and winds, the agency warned.

"Please remain vigilant for landslides, inundation of low ground, flooding of rivers, storms, and high and tidal waves," the weather agency said. Some parts of central Japan could see up to 800 millimetres of rain in the 24 hours to noon Friday, it said.

The areas at risk include parts of the country still recovering from flooding and landslides caused by record rains in July that killed over 200 people. The approach of Cimaron, whose name means wild ox according to the Hong Kong Observatory, comes as Typhoon Soulik was already bringing heavy rain to parts of the main southern island of Kyushu.