Get latest articles and stories on Tech at LatestLY. Former Huawei sub-brand Honor has teased the launch of its first foldable smartphone, the Honor V. 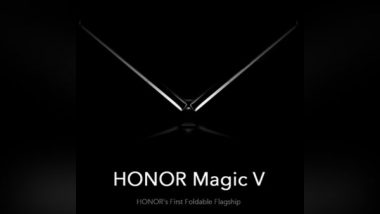 An image shared on its Twitter account on Wednesday teased the design of the device, showing a telltale hinge between the two halves of the device.

The post read, "Unfold all the potential. This is HONOR's first foldable flagship phone, the #HONORMagicV," though no exact launch date has been announced and Honor declined to comment.

According to The Verge, Honor has been open about its desire to release a foldable for some time. As early as 2019, the company's CEO George Zhao said that he was interested in producing a foldable under the Honor brand, but expressed concerns that the device would be too expensive for Honor's younger target market.

In June this year, reports emerged that the development of such a device was underway at the company and that its folding display panels were being provided by BOE and Visionox.

There aren't many details on the exact form the Magic V could take, but reports suggest it could have an 8.03-inch folding inner display paired with a 6.45-inch outer screen. That suggests a device that resembles Samsung's Z Fold devices (which unfold from a phone form factor into a tablet) rather than its Z Flip (a phone that folds to become more compact).

That's also the form factor used by Honor's former parent company Huawei with its Mate X2, though now that Honor has been independent for a year it's unclear how similar its upcoming device might be.

Honor joins an expanding list of companies that have either released or are planning to launch their own foldables. Samsung and Huawei were two early entrants, but more recently we've seen foldables from Xiaomi, Motorola, and Oppo, which officially announced its Find N phone earlier this month. Google is also rumoured to be planning to announce as many as two foldables of its own in the near future. (ANI)