Xiaomi, the Chinese tech giant, will officially launch the 11i Hypercharge smartphone in India on January 6, 2022. The company has teased the device on its official Twitter account, revealing the launch date. 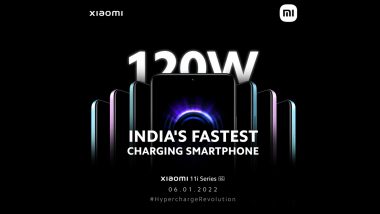 Xiaomi, the Chinese tech giant, will officially launch the 11i Hypercharge smartphone in India on January 6, 2022. The company has teased the device on its official Twitter account, revealing the launch date. The handset has also been listed on Flipkart, which confirms its availability via the e-commerce platform. The upcoming Xiaomi 11i Hypercharge is said to be a rebranded Redmi Note 11 Pro+ device, which was introduced in China earlier this year. Xiaomi 12 Renders, Price & Specifications Emerge Online: Report.

Xiaomi has also set up a dedicated microsite on the India website and will reveal several key specifications of the 11i Hypercharge phone tomorrow. As per the teaser, Xiaomi 11i Hypercharge will come with 120W fast charging support that is claimed to fully charge the battery in 15 minutes.

As mentioned earlier, it will be a rebranded version of Redmi Note 11 Pro+ phone. So Xiaomi 11i Hypercharge will carry similar specifications as that of the Note 11 Pro+ model.

The handset will get a 6.67-inch AMOLED display with a refresh rate of 120Hz. For photogragphy, it will be equipped with a triple rear camera module consisting of a 108MP main lens. It is likely to be powered by MediaTek Dimensity 920 SoC. In addition to this, the smartphone will get dual JBL-tuned stereo speakers, NFC support and a 4,500mAh battery. Coming to the pricing, Xiaomi 11i Hypercharge is said to be priced at 22,500 for the 6GB + 128GB model and Rs 24,900 for the 8GB + 128GB variant. The top-end model with 8GB + 256GB internal storage could retail at Rs 27,300.

(The above story first appeared on LatestLY on Dec 22, 2021 05:54 PM IST. For more news and updates on politics, world, sports, entertainment and lifestyle, log on to our website latestly.com).