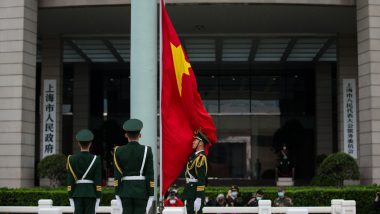 Tokyo, February 23: Amid the ongoing human rights abuse on Uyghurs by China, 12 major Japanese companies have announced their decision to cease their business deals with the Chinese companies found to be benefiting from the forced labour of the minority ethnic community in Xinjiang.

According to a report by Kyodo News, pressure has been mounting on Japanese firms to take action over such human rights abuses in the supply chain after the United States and Britain imposed import restrictions on cotton and other products originating from the autonomous region. Uyghur Genocide: China Denies Coercive Birth Control Measures Among Muslim Minority Women in Xinjiang.

China's sweeping crackdown on Muslim ethnic minority, Uyghurs in Xinjiang since 2017 in the name of counterterrorism, has drawn global ire. However, the Japanese government had been slow in imposing sanctions on Chinese entities, thus, drawing criticisms for being "passive in addressing the issue due to fears of provoking China".

Last year, the Australian Strategic Policy Institute had identified more than 80 global companies "directly or indirectly benefiting from the use of Uyghur workers outside Xinjiang through abusive labor transfer programs".

Recently, the Japanese daily had asked 14 Japanese companies, which were listed by the Australian think tank, on how they plan to respond. The companies, except for Panasonic Corp. that declined to comment, either denied directly doing business with companies suspected of benefiting from forced labour or said they could not verify the claims against their suppliers, Kyodo News said.

Meanwhile, 12 companies had said that they would cease doing business with their business partners if found to be using forced labour of the Uyghur community.

Following the report by Kyodo News, Toshiba Corp., which has a license contract with a company suspected of using forced labour, has not confirmed the claims but announced its decision to terminate its business with them by the end of 2021.

The list of 12 companies includes Fast Retailing Co., operator of the Uniqlo casual clothing brand, Sony Corp. and Hitachi Ltd. Meanwhile, Ryohin Keikaku Co., the Muji brand goods store chain operator, has been embargoed by the US government for having dealings with Chinese firms.

The company that had been selling products with "Xinjiang cotton" as part of the product's name on its official website has removed the mark following the Kyodo News report. In January, the United States had announced a ban on the entry of cotton and tomato products from China's Xinjiang region amid allegations that detainee or prison labour from Uyghurs went into making them.

The CBP ban, also known as a Withhold Release Order (WRO) was imposed following the emergence of reports indicating that the products were manufactured using forced labour from detained Uyghurs. China has been rebuked globally for cracking down on Uyghur Muslims by sending them to mass detention camps, interfering in their religious activities and sending members of the community to undergo some form of forcible re-education or indoctrination.

Genocide is a serious crime under international law and the US government has adopted the term on rare occasions only after extensive documentation. Some experts said reports of mass surveillance, torture, arbitrary detentions and forced detentions employed by China against Uyghurs amount to "demographic genocide".