One of the challenges is access to raw data, especially the data at the start of the pandemic that was not shared." 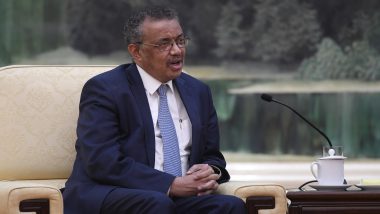 Geneva, July 15: The World Health Organization (WHO) on Thursday called on China to cooperate in the investigation into the origins of the COVID-19 pandemic, the first cases of which were reported in the Chinese city of Wuhan in December 2019. Addressing a press briefing in Geneva, WHO chief Tedros Ghebreyesus said, "We hope there will be better co-operation to get to the bottom of what happened."

Answering a question on the status of the COVID-19 probe after the conclusion of phase one study, Tedros said, "...we all know there are some challenges that have to be addressed. One of the challenges is access to raw data, especially the data at the start of the pandemic that was not shared."

"Now we have designed the second phase of the study and we are asking China to be transparent and cooperate, especially on the raw data that we had asked for in the early days of the pandemic," he added. COVID-19 Third Wave Scare: WHO Chief Tedros Adhanom Ghebreyesus Warns of 'Early Stages' of Third Wave of Coronavirus Amid Delta Variant Surge.

The so-called "lab leak" theory has gained traction after a series of revelations. It has become the subject of renewed public debate after several prominent scientists called for a full investigation into the origins of the virus.

A WHO-led team of scientists that travelled to China in early 2021 to investigate the origins of the virus struggled to get a clear picture of what research China was conducting beforehand, faced constraints during its visit and had little power to conduct thorough, impartial research.