China Blames US for Security Crisis in Afghanistan

China has blamed the United States for the ongoing security crisis in Afghanistan and said Washington is withdrawing its troops from the war-torn country by dumping the war on the Afghan people. 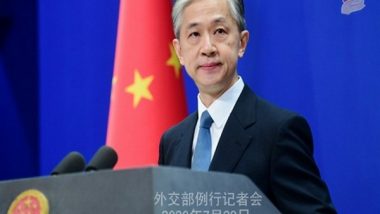 Beijing, July 11: China has blamed the United States for the ongoing security crisis in Afghanistan and said Washington is withdrawing its troops from the war-torn country by dumping the war on the Afghan people.

"The US disregards its responsibilities and duties and withdraws troops from Afghanistan hastily, dumping the mess and war on the Afghan people and countries in the region," the Chinese Foreign Ministry spokesman Wang Wenbin said on Saturday, reported The News International.  Kandahar Fighting: 'Indian Diplomats, Security Personnel Brought Back For the Time Being' Says MEA Spokesperson Arindam Bagchi

"The US, as the original culprit of the Afghan issue, bears unavoidable responsibility for the current situation in Afghanistan," he added.

The Pakistani publication further reported that Chinese Foreign Minister Wang Yi is set to discuss the Afghan security situation with counterparts from Russia, India, Pakistan, and numerous Central Asian countries at a meeting of the Shanghai Cooperation Organisation next week.

Earlier, China evacuated its nationals from Afghanistan as US troops stepped up their withdrawal from the war-torn nation, the airline that carried out the emergency chartered flight said, reported The News.

Among them were 22 people who were later confirmed to be infected with coronavirus, despite the airline taking "top-notch epidemic prevention measures" during the flight and upon landing, it added.

Taliban have been capturing newer districts and areas at a lightning speed and the Afghan government forces are also fleeing from a number of places there.

Meanwhile, Afghan government officials have dismissed as propaganda claims by Taliban officials that the insurgent group had captured 85 per cent of territory in Afghanistan, amid US troops withdrawal from the country. (ANI)