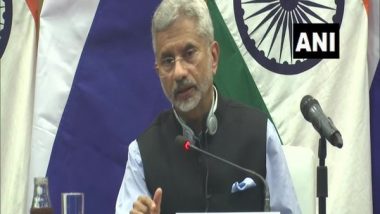 Earlier, India has noted the United States' decision to withdraw its troops from Afghanistan and has expressed concerns over the probable increase in the violence and targeted killings in the war-torn country. External Affairs Minister S Jaishankar at UNHCR, Says 'Terrorism Continues to Be One of the Gravest Threats to Humankind'.

In a statement in April, the Ministry of External Affairs said New Delhi is of the view that an Afghan peace process should be Afghan-led, Afghan-owned and Afghan-controlled and any political settlement must be inclusive and should preserve the socio-economic and political gains of the past 19 years. India has also called for an immediate and comprehensive ceasefire.

US President Joe Biden had announced that he would begin withdrawing US troops from Afghanistan on May 1, which now has been stated according to reports. Afghanistan has been marred by insurgency for the past several years.

An agreement was signed during the meet between the Taliban and the United States with an aim to end the conflict in Afghanistan. The agreement calls for a full US withdrawal from Afghanistan if the terror group upholds counterterrorism commitments such as denying safe haven to al Qaeda.