Get latest articles and stories on World at LatestLY. Finland's President Sauli Niinisto held a telephonic conversation with his Russian counterpart Vladimir Putin on Saturday and told him that the Nordic nation will decide to seek NATO membership in the first few days. 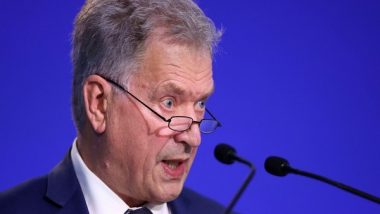 Helsinki [Finland], May 14 (ANI): Finland's President Sauli Niinisto held a telephonic conversation with his Russian counterpart Vladimir Putin on Saturday and told him that the Nordic nation will decide to seek NATO membership in the first few days.

Finland's President said that the Nordic nation will decide "to seek NATO membership in the next few days," CNN reported citing the statement issued by Niinisto's office.

"President Niinisto told President Putin how fundamentally the Russian demands in late 2021 aiming at preventing countries from joining NATO and Russia's massive invasion of Ukraine in February 2022 have altered the security environment of Finland," the statement further reads.

Niinisto said that the conversation between them (Finland President and Vladimir Putin) was direct and straightforward and conducted without aggravations. Avoiding tensions was considered important.

According to the statement, Niintiso noted that during their first meeting in 2012 he had already told Putin that every independent nation maximizes its security and this is what is happening now.

The statement further added that Finland strengthens its own security and assumes its responsibility by joining NATO as they are not away from anyone else. In the future, Finland "wants to take care of the practical questions arising from being a neighbour of Russia in a correct and professional manner," it adds.

"Repeated his (Niintiso) deep concern over the human suffering caused by the war Russia wages in Ukraine" and "stressed the imperative of peace," according to the statement. It further reads that Niintiso also "conveyed the messages on securing the evacuation of civilians delivered earlier in the same week by (Ukraine's) President Volodymyr Zelenskyy", according to CNN

Referring to the telephonic conversation, the Ministry of Foreign Affairs of Russia tweeted, "President #Putin spoke over the phone with President @niinisto (Finland's President Sauli Niinisto). Presidents exchanged views on the announced decision by Finland's leadership to apply for #NATO membership. Vladimir Putin stressed there were no threats to Finland's security. "

According to the RAO Nordic Oy, there were certain problems pertaining to receiving electricity payments, owing to which they decided on suspending the supplies, reported TASS. Finnish national electricity transmission grid operator Fingrid Oyj also said in a statement on Friday that RAO Nordic Oy will suspend imports of electricity to Finland at 1:00 a.m. local time on Saturday.

"According to RAO Nordic, further direct or bilateral sales of electricity imported from Russia will be halted until further notice due to problems in receiving payments for electricity sold on the market," Fingrid said.

However, RAO Nordic Oy has confirmed that the lack of electricity import from Russia will be compensated by Sweden. Furthermore, more electricity will be generated in Finland, reported TASS. (ANI)