Union Minister of Women and Child Development Smriti Irani on Friday reiterated India's commitment towards advancing the goals of gender equality and empowerment of all women to ensure that men and women are accorded equal treatment and enjoy the same opportunities everywhere. 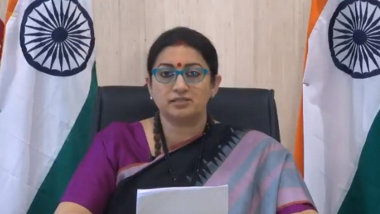 New York, March 20: Union Minister of Women and Child Development Smriti Irani on Friday reiterated India's commitment towards advancing the goals of gender equality and empowerment of all women to ensure that men and women are accorded equal treatment and enjoy the same opportunities everywhere.

Speaking at a general discussion of the 65th session of the UN Commission on the Status of Women, Irani said: "India remains steadfast in its commitment to build a more just and equal post COVID world for our daughters and women across the world." International Shooter Vartika Singh Registers Case Against Smriti Irani & Her Close Associates on Charges of Corruption.

Lauding Prime Minister Narendra Modi to move India from a paradigm of women's development to women-led development, the minister stated that women's agency and leadership is playing a key role in all endeavours as the country realises the aspiration of 'Atmanirbhar Bharat'.

"We in India are implementing a series of flagship programmes that focus on significantly expanding women's financial inclusion, employment and self-employment opportunities, healthcare, nutrition, safety, security and education," she said.

Reservations of seats for women in local governance have ensured that over 1.37 million elected Indian women representatives provide leadership in formulating and implementing gender-sensitive public policies at the community level, said Irani.

"It is a cause of great joy for us that through the financial inclusion Scheme of Pradhan Mantri Jan Dhan Yojana that for the first time in the history of our country over 220 million Indian women were formerly brought into the banking system," she said.

The Union Minister also remarked that the government has prioritised gender targets within the Indian skill programme and in initiatives for promoting women's entrepreneurship and encouraging access for women to credit without collateral, most notably by providing collateral-free loans of Rs 26 crore to citizens.

"While the Government of India has dedicated its efforts to provide clean cooking fuel to over 80 million Indian women in the past 6 years, it is the construction of 100 million household toilets that have contributed immensely to women's health and welfare in India," she further said.