Get latest articles and stories on World at LatestLY. India's conservative position on not encouraging Crypto Currency is being rapidly vindicated by the negative experiences of various Crypto funds with the latest being Singapore's Three Arrows crypto fund. Experts say that India correctly predicted the adverse economic headwinds and perhaps saved a lot of people from economic ruin. 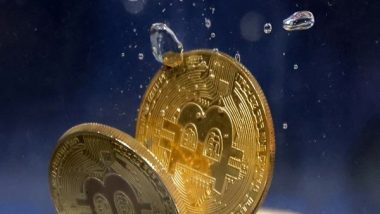 Singapore, July 5 (ANI): India's conservative position on not encouraging Crypto Currency is being rapidly vindicated by the negative experiences of various Crypto funds with the latest being Singapore's Three Arrows crypto fund. Experts say that India correctly predicted the adverse economic headwinds and perhaps saved a lot of people from economic ruin.

Last week, Singapore-based crypto hedge fund, Three Arrows Capital (3AC), was reported by various media sources to be in trouble. It is one of the high-profile crypto investment firms that has run into difficulties recently as the crypto market valuation plunged.

It has fallen by about a third since it hit its peak sometime in November last year.

In the latest sign of the impact of the crypto market downturn, both Bloomberg and Reuters quoted sources that said that 3AC has entered liquidation after failing to make payments on a loan of 15,250 bitcoin (approximately USD324 million) and USD350 million worth of USDC, a stablecoin.

Reuters reported that its sources told it that a court in the British Virgin Islands, where 3AC's fund is incorporated, issued the liquidation order on June 27. The Commercial Court there orders a company to be liquidated if it is regarded as insolvent because it cannot pay its debts.

It is less common for companies to voluntarily liquidate.

3AC, one of crypto's best-known hedge funds was founded by former Credit Suisse traders Zhu Su, a Singaporean, and Kyle Davies at the kitchen table of their apartment in 2012. Zhu famously predicted the bottom of the last crypto cycle in December 2018 when bitcoin was worth about USD 3,850.

According to blockchain analytics firm Nansen, its blockchain holdings were once worth close to USD 10 billion.

On the other hand, the Indian regulators had attempted to ban cryptocurrencies only to be overturned by the Supreme Court.

To dampen crypto trading, a one per cent tax deducted at source (TDS) on crypto transactions kicked in on July 1. The one per cent TDS liability is the second major provision of India's recently introduced crypto tax law after a 30 per cent capital gains tax on all transactions took effect on April 1.

India's crypto community has been up in arms over the new provisions and warned that it will have a severely negative impact on crypto trading in India, especially with the global market slump.

Sumit Gupta, co-founder and CEO at CoinDCX, tweeted that this tax "would do more harm than good." He said developers and entrepreneurs might flee to friendlier jurisdictions and added that a 30 per cent taxation rate coupled with one per cent TDS is "unfair."

The Indian government has been very careful not to legitimise crypto trading. It says that they are taxing crypto because people are profiting from it.

"We have been cautioning against crypto and look at what has happened to the crypto market now," said Reserve Bank of India (RBI) Governor Shaktikanta Das in a CNBC-TV18 interview earlier this year after the value of cryptocurrencies took a tumble. He had warned about the dangers of investing in something that has no underlying value. "Our position remains very clear, it will seriously undermine the monetary, financial and macroeconomic stability of India."

According to CoinGecko, the total market cap of cryptocurrencies has shrunk by more than a third, down to around USD930 billion from a high of about USD 3 trillion reached in November of 2021.

Although the crypto market has been on the decline this year, there isn't a specific reason for this. Analysts have suggested that the wider global economic situation of higher interest rates, and a looming recession, coupled with investors' lower risk appetite has caused the decline.

This has caused various calamities in the market. Some believe a crypto winter has arrived. Besides 3AC, among the recent disasters is the collapse of terra USD stablecoin and sister coin luna, and liquidity issues at lenders Celsius Network and Babel Finance. Earlier, crypto lender BlockFi and prime brokerage Genesis said they had to liquidate one of their large counterparties recently. In June, Crypto giant Coinbase slashed 1,100 jobs. Crypto broker Voyager Digital reportedly the party behind the default notice served on 3AC, has also been impacted.

"I think given this price drop, from the all-time high of USD 68,000 to USD20,000 now, it will probably take a while to get back. It probably will take a few months or a couple of years," Changpeng Zhao, the founder of the world's largest crypto exchange, Binance, told The Guardian. He added that bitcoin may take years to recover from the recent crash.

However, other market participants remain bullish over crypto's future.

"What I expect from bitcoin is volatility short-term and growth long-term," said Kiana Danial, founder of Invest Diva and author of Cryptocurrency Investing For Dummies.

PricewaterhouseCoopers' fourth annual global crypto hedge fund report published in June showed that although the crypto market is bearish now, 35 per cent of fund managers in its survey predicted that bitcoin will be trading over USD50,000 by the end of 2022 and a further 42 per cent forecast that it will trade between USD75,000 to 100,000 by the year's end.

JPMorgan Chase & Co. believes that the current phase of cryptocurrency deleveraging will not last much longer. In a note published on June 29, it supported this prognosis by saying that it has been observed that "crypto entities with the stronger balance sheets are currently stepping in to help contain the contagion." It has also been noticed that venture capital funding which is "an important source of capital for the crypto ecosystem, continued at a healthy pace in May and June." (ANI)