However, police later clarified that he wasn't tried to carry out an attack. According to police, the man began walking in a section of the checkpoint reserved for automobiles. 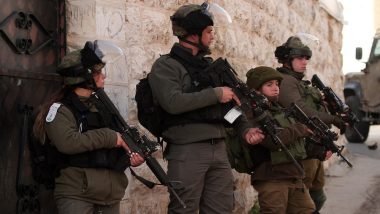 Tel Aviv, December 7: Israel security forces shot at a Palestinian man who had been behaving suspiciously and ignored guards' call to stop at the Qalandiya checkpoint between the West Bank and Israel on Monday. The man is in serious condition, The Times of Israel reported.

Earlier, it was reported that the man was trying to carry out a stabbing attack. However, police later clarified that he wasn't tried to carry out an attack.

According to police, the man began walking in a section of the checkpoint reserved for automobiles. Also Read | Farmers’ Protests: Intel Alert to MEA on Sikhs For Justice’s Plan to Shut Down Indian Embassies in London, New York and Toronto on December 10.

"From an initial investigation, it appears the guards called for him to stop several times and when he did not answer their calls, they carried out an arrest protocol in which they fired at his lower body," the police said. Also Read | Pope Francis to Visit Iraq in March 2021, His First Foreign Trip Since Coronavirus Pandemic.

The man is reportedly in serious condition. Medics were called to the scene. "The circumstances of the event are being investigated," it added.

In August guards at Qalandiya shot a deaf man who didn't hear them calling on him to leave a restricted area.