Israel, UK to Work on Preventing Iran from Getting Nuclear Weapons

UK Foreign Secretary Liz Truss and Israeli Foreign Minister Yair Lapid say they will do everything to prevent Iran from becoming a nuclear power. 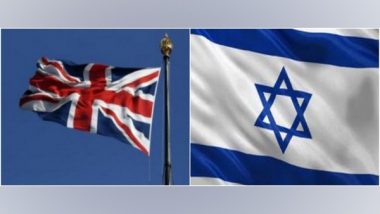 London, November 29: UK Foreign Secretary Liz Truss and Israeli Foreign Minister Yair Lapid say they will do everything to prevent Iran from becoming a nuclear power.

Truss and Lapid wrote a joint article for The Daily Telegraph ahead of the Monday signing of a memorandum of understanding on deepening ties, particularly in what concerns cybersecurity, defense, and trade. Also Read | Mehul Choksi Fears He May Be Kidnapped Again and Taken to Guyana.

"We will also work night and day to prevent the Iranian regime from ever becoming a nuclear power. The clock is ticking, which heightens the need for close cooperation with our partners and friends to thwart Tehran's ambitions," Truss and Lapid said in their article. Also Read | WHO Criticises Travel Bans on Southern African Countries Due to Omicron Variant of COVID-19.

Iranian Foreign Minister Hossein Amir-Abdollahian said on Friday that despite the US withdrawal from the Iran nuclear deal, Tehran will be seriously involved in the Vienna negotiations over the Joint Comprehensive Plan of Action (JCPOA) on the Iranian nuclear program on November 29.

In 2015, Iran signed the JCPOA (also known as the Iran nuclear deal) with the P5+1 group of countries (the United States, China, France, Russia, the United Kingdom - plus Germany) and the European Union. It required Iran to scale back its nuclear program and severely downgrade its uranium reserves in exchange for sanctions relief, including lifting the arms embargo five years after the deal's adoption. In 2018, the US abandoned its conciliatory stance on Iran, withdrawing from the JCPOA and implementing hard-line policies against Tehran, prompting Iran to largely abandon its obligations under the accord.

The sixth round of negotiations to restore the JCPOA and lift US sanctions ended in Vienna on June 20. The seventh-round will begin on Monday.

Permanent Representative of Russia to the International Organizations in Vienna Mikhail Ulyanov said the deal is almost sealed and only political issues regarding the US commitment to the agreement will be discussed.