A Palestinian man was killed on Tuesday night by Israeli soldiers near the northern West Bank city of Nablus, Palestinian medics said. 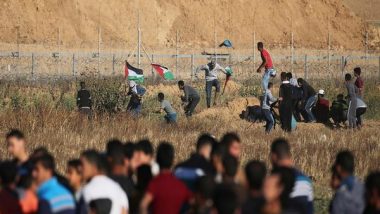 The Palestinian Ministry of Health said that Shadi Isleem, a 41-year-old Palestinian man, was shot dead by Israeli soldiers near the village of Beita.

There has been no immediate Israeli army comment on the incident.

Over the past few weeks, Palestinian protestors have been demonstrating every day at the village of Beita in protest against building an Israeli settlement outpost, which had been evacuated by Israeli settlers, but the Israeli army kept its presence in the area.

On Monday, Palestinian Prime Minister Mohammed Ishtaye said in a statement that in recent days, the attacks of the Israeli soldiers and settlers on the Palestinians in the West Bank have increased. (ANI/Xinhua)