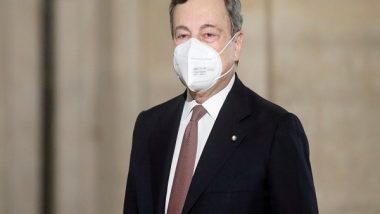 The newspaper reported about the second vaccine injection to the head of the Italian government in its report on the vaccination of German Chancellor Angela Merkel. Both European leaders received vaccine injections from the UK-Swedish company AstraZeneca as the first dose. Italy Claims to Have Developed COVID-19 Vaccine Which Neutralises Coronavirus in Human Cells: Reports.

Last week, Draghi supported the combined use of COVID-19 vaccines. According to him, after the first shot, he developed a low number of antibodies, so he was advised to use another vaccine as a second dose.

On Monday, according to Corriere, Draghi received an injection of the Pfizer vaccine. Merkel was inoculated with the Moderna vaccine as the second dose.