Get latest articles and stories on World at LatestLY. The faulty water management system with large-scale abstraction without management and sufficient recharge in Pakistan has resulted in the frequent occurrence of natural disasters like floods and drought. 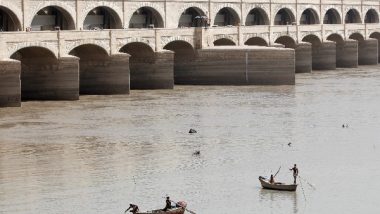 Islamabad [Pakistan], November 27 (ANI): The faulty water management system with large-scale abstraction without management and sufficient recharge in Pakistan has resulted in the frequent occurrence of natural disasters like floods and drought.

The recent floods which wreaked havoc across the South-Asian country this year highlighted how delayed response to the disaster and improper practices concerning the water resources resulted in the natural calamity, according to Just Earth news.

Industrial and agricultural waste contamination is reportedly having a significant negative impact on Pakistan's water quality. In addition, extensive groundwater withdrawal without management and adequate recharging worsens the issue.

Despite Pakistan having the world's fourth-largest aquifer, natural resources including freshwater sources are under constant depletion in Pakistan.

The Indus Basin stores groundwater at least 80 times the volume stored in Pakistan's three mega-dams and more than 80 per cent of the country's arable land is irrigated by the Indus's waters.

The primary causes of the Indus' pollution, however, are the massive structures built across the basin to redirect water flow across the dam. The demand for water rose as a result of climate change, population growth, and rising industry. The top ten nations most susceptible to climate change now include Pakistan, Just Earth news reported.

Over 90 per cent of Pakistan's water resources are used for agriculture, which is inefficient and wasteful. It continues to rely on crops that require a lot of water, such as rice and sugarcane. Inadequate maintenance of irrigational channels results in significant water loss. The current water problems in Pakistan have a lengthy history.

No efforts are made by the local authorities to deal with the calamities that have emerged over time in Pakistan due to water-related issues as well as to increase agricultural productivity, which supports 40 per cent of its population.

Notably, the need for water rose as a result of rising population expansion, climatic change, industrialization, and global warming. Pakistan is one of the top ten nations that are most at risk from climate change, according to Just Earth news. (ANI)