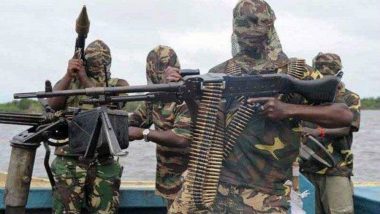 He said the airstrikes were carried out on Thursday as part of an operation after "a series of aerial surveillance missions had indicated their locations." According to the spokesperson, the locations were being used as staging areas where some Boko Haram leaders and their fighters met to plan and launch attacks. Also Read | Rabi Ul Awwal 1442 Moon Not Sighted in India, Pakistan, Bangladesh; Eid-e-Milad 2020 Date Is October 30.

Accordingly, the task force dispatched a group of "Nigerian air force fighter jets and helicopter gunships" to the two locations, Enenche said. The attack aircraft scored devastating hits in the target areas, destroying some structures and neutralizing several of the terrorists, he added without specifying the number of militants killed.

Boko Haram has been trying to establish an Islamist state in northeastern Nigeria since 2009, extending its attacks to countries in the Lake Chad Basin.