Get latest articles and stories on World at LatestLY. Amid the raging economic crisis, Pakistan Prime Minister Shehbaz Sharif has formed the National Economic Advisory Council which comprises 21 members. 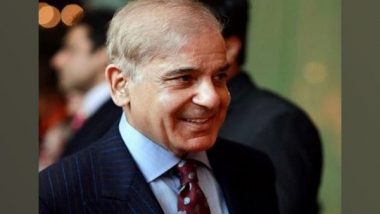 The Financial Division has informed that the 21-member Advisory Council will be chaired by the Pakistan PM Sharif, ARY News reported.

The new economic council will review the economy of the country and will also suggest the necessary steps.

Also Read | 'Sex Roster' Made by Man for Nine Wives! Meet Arthur O Urso and His Partners Who Want To Fulfil His Sexuality at Any Cost.

The economic body will also consider various subsidies and the issue of climate change, according to the notification, reported ARY News.

The Terms of Reference (ToR) of the advisory council have also been notified. The economic council will also recommend policy-making to improve the national economy, as reported by ARY News.

Earlier today, PM Sharif left for Saudi Arabia for his three-day visit and will seek an additional package of USD 3.2 billion.

"Today I am embarking on a visit to Saudi Arabia to renew & reaffirm our bonds of brotherhood & friendship. I will have wide-ranging discussions with Saudi leadership. KSA is one of our greatest friends & as Custodian of the Two Holy Places, has a special place in all our hearts," Shehbaz Sharif tweeted.

Saudi Arabia had already given USD 3 billion deposits to the debt-ridden country and an oil facility on deferred payment worth USD 1.2 billion during Imran Khan's tenure. Estimates say Pakistan requires USD 12 billion to prevent the balance of payment crisis and further depletion of the foreign currency reserves.

"We are going to request the Kingdom of Saudi Arabia to increase the amount of the deposit from USD 3 billion to USD 5 billion and double the Saudi Oil Facility (SOF) from USD 1.2 billion to USD 2.4 billion, so the total package could be increased up to USD 7.4 billion during the visit of premier Shehbaz Sharif," top official sources confirmed while talking to The News International on Wednesday.

Dozens of officials and political leaders have accompanied the Pakistan Prime Minister on his maiden visit to the Kingdom. (ANI)