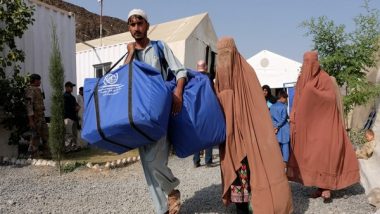 “Pakistan is in no condition right now to accept any more refugees,” Moeed Yusuf told a news conference in the capital, Islamabad. He said Pakistan is already hosting more than 3 million Afghan refugees who had fled the war and violence in their country over the past decades. Also Read | PM Narendra Modi, Scott Morrison Review Progress in India-Australia Comprehensive Strategic Partnership.

Yusuf said Pakistan will try to do whatever is possible to help Afghans, but that international efforts should step up to prevent a humanitarian crisis. He asked the world community not to repeat the past mistake of abandoning Afghanistan. Also Read | Afghanistan Crisis: First Passenger Plane From Iran Arrives in Kabul, Says Report.

Yusuf also warned that the Islamic State group and other militants — including the Pakistani Taliban who have sought refuge across the border — could exploit such a situation.

“You don't need to think too much to know what will happen. There will be a security vacuum. You already know ISIS is present there, Pakistani Taliban are present there, al-Qaida is there,” he said, adding that these groups are sworn enemies both of Pakistan and the West.

“If Afghanistan destabilizes the spillover effect comes to Pakistan,” he said. Yusuf also asked the international community to constructively engage with the Taliban for the sake of peace and stability in the region.