Cummings, who had an unceremonious exit from 10 Downing Street last year, is due to give evidence before an influential House of Commons committee hearing next week on the government's handling of the pandemic. 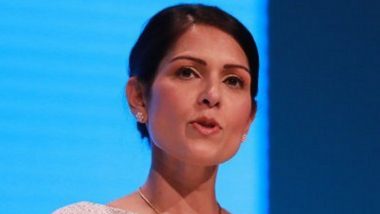 Cummings, who had an unceremonious exit from 10 Downing Street last year, is due to give evidence before an influential House of Commons committee hearing next week on the government's handling of the pandemic.

Ahead of that appearance before the joint Commons Health and Tech Committee meeting on Wednesday, he issued a series of tweets to allege that the UK's official policy was to let the deadly virus spread through the population and thereby achieve so-called "herd immunity", and that it was only later realised by Downing Street that would be a "catastrophe". Oxford-AstraZeneca COVID-19 Vaccine 80% Effective Against B1.617.2 Variant: UK Study.

"Absolutely not," Patel told the BBC when confronted with the claims on Sunday. "Our strategy was always about public health, saving lives and protecting the NHS (National Health Service)," she said. However, Cummings repeated his claims in a fresh Twitter tirade even after the official denials.

"Herd immunity was officially seen as UNAVOIDABLE week of 9/3. It wd come either a) in a single peak over by Sep, or b) in a 2nd peak in winter. (a) was seen as easier to manage & less of a catastrophe so it was Plan A,” Cummings tweeted.

"Critical as I am of the PM in all sorts of ways, it's vital to understand the disaster was not just his fault: the official plan was disastrously misconceived, DHSC/CABOFF [Department of Health and Social Care and Cabinet Office] did not understand this or why, and a PlanB had to be bodged amid total & utter chaos," he added.

But the UK Health Security Agency chief, Dr Jenny Harries, told the BBC that allowing people to become infected "has never been on the agenda" and that she had never been in a government meeting where “herd immunity was put forward as a mechanism of control" for the pandemic.

"But bear in mind I would not have been in most of the high-level ones as the Deputy Chief Medical Officer," said Dr Harries. "What you're looking at in a population is to try and see at which point your population would be safe, and this is what we do with this very successful vaccination programme. That's not the same as saying... that the aim would be to allow people to become infected and develop herd immunity. That has never been on the agenda but you would always look to see how safe you can get your population through a vaccination programme," she said. China: Severe Weather Kills 21 Participants of 100-km Cross-Country Mountain Marathon Race in Gansu Province.

It comes as the NHS announced another new vaccination milestone of 60 million doses, with Saturday marking a record day with 762,361 first or second jabs being delivered.