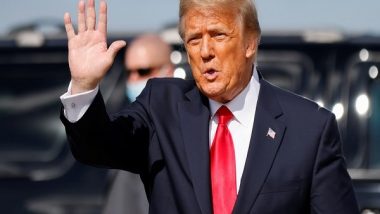 "Trump Media & Technology Group Corp. and Digital World Acquisition Corp., today announced that Digital World Acquisition Corp. has entered into subscription agreements for $1 billion in committed capital to be received upon consummation of their business combination (the 'PIPE') from a diverse group of institutional investors," the TMTG said in a statement, issued on Saturday. Also Read | India-Russia To Hold First 2+2 Dialogue in Delhi Tomorrow, Discussions on Key Bilateral, Global Issues to Take Place.

The former president, who is still banned from most social media platforms, crowed about this development saying it "sends an important message to Big Tech that censorship and political discrimination must end." Also Read | China Assails US Political System in New Report Ahead of Summit on Democracy.

Major social media like Facebook, Twitter and Instagram banned Trump following the January 6 unrest at the US Capitol, which some praise as a reasonable response to alleged incitement of riots, while others voice concerns about freedom of speech and expression in the United States.