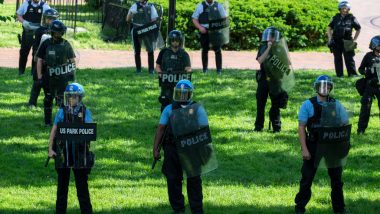 Police stand guard as protesters gather near Lafayette Square Park outside the White House on May 31, 2020 in Washington, DC. (Photo Credits: Getty Images)

Washington DC, June 1: Mayor Muriel Bowser has ordered a citywide curfew for the District of Columbia from 11 pm on Sunday, May 31, until 6 am on Monday, June 1. Also Read | Pakistan Plans to Seek USD 15 Billion in New Loans to Pay External Public Debt: Report.

The mayor took to Twitter on Sunday (local time) evening and said that the office has also activated the DC National Guard to support the Metropolitan Police Department. The overnight curfew comes on a day as the DC region witnessed several protests, including a Howard University protest, as demonstrators travelled to the White House calling for justice for George Floyd. Also Read | Gorge Floyd Killing: Protest at White House Seeking Justice for African American 'Murdered' by Police.

Virginia Governor Ralph Northam also declared a state emergency due to 'escalated violence' in the region. As many as 40 cities and Washington D.C. across the United States have imposed curfews on Sunday (local time) in response to the continuing protests against the death of African-American man George Floyd in police custody.

According to CNN, approximately 5,000 National Guard members have been activated in 15 states and Washington, DC with another 2,000 prepared to activate if needed.

"Today, about 5,000 National Guard Soldiers and Airmen are supporting our local and state partners responding to civil unrest in 15 states and DC [District of Columbia] Thousands more stand ready if needed," Chief of the National Guard Bureau Gen. Joseph Lengyel said on Sunday.

Demonstrators across the United States have been protesting since May 25, when George Floyd, a 46-years-old African American man, died under the police custody in the city of Minneapolis.