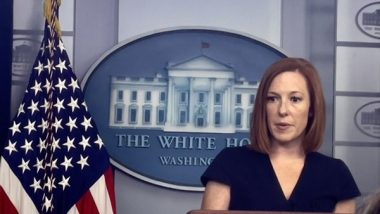 Speaking to reporters at a White House briefing, Psaki said the Biden administration is "deeply disappointed" by China's rejection.

"Their position is irresponsible and frankly, dangerous. Alongside other member states around the world, we continue to call for China to provide the needed access for data and samples," the press secretary declared.

Psaki further added, "This is critical, so we can understand, to prevent the next pandemic. This is about saving lives in the future and it is not a time to be stonewalling."

The WHO earlier this month proposed a second phase of studies into the origins of the coronavirus in China, including audits of laboratories and markets in the city of Wuhan, calling for transparency from authorities.

Beijing reacted to the WHO proposal with Zeng Yixin, vice minister of China's National Health Commission (NHC), telling reporters that the WHO plan "disregards common sense and defies science." Zeng reiterated China's position that some data could not be completely shared due to privacy concerns.

Reacting to China's position Psaki said it was clear the country "isn't living up to their obligations" on investigating the pandemic and said Biden will shift focus to a global campaign to launch a "multilateral effort and support for putting pressure" on China to increase transparency.

She said that the multilateral approach would be a "big focus" of Biden's strategy in engaging with China more broadly. "It is not just the United States calling for this," the White House official warned.

"As a part of our renewed engagement and our effort to build a coalition of support around the world with allies and partners, we are joined by the international community on this," Psaki concluded. (ANI)