WHO Pledges Full Support As Tanzania Launches Vaccination Against Polio

The WHO would provide technical support in collaboration with UNICEF and the Global Polio Eradication Initiative, a Chinese news agency reported citing an official statement. 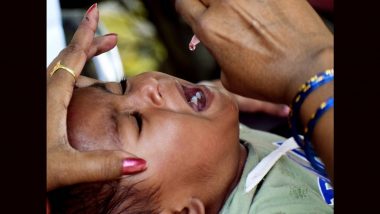 Dar es Salaam, May 18: The World Health Organisation extended its support to Tanzania in organizing polio campaigns, after Tanzania launched its second round of vaccination against polio on Wednesday to curb the outbreak of the virus in the country. The WHO would provide technical support in collaboration with UNICEF and the Global Polio Eradication Initiative, a Chinese news agency reported citing an official statement.

"This campaign is an important intervention for Tanzania to make that all eligible children get the polio drops," said WHO Representative to Tanzania Zabulon Yoti. "We are grateful to the Global Polio Eradication Initiative and donors that funded this important exercise that is key to maintaining Tanzania polio-free," reported Xinhua. The vaccination drive will be organised in 195 districts of the country from May 18 to May 21. It aims to reach 10,576,805 children under 5 years of age. Tanzania To Vaccinate Over 10 Million Kids Against Polio Between April 28 and May 1.

As the country reported the outbreak of the virus, the first round of the vaccination campaign was held between March 24 to March 27, which benefitted more than 1 million children in four regions of Mbeya Njombe, Ruvuma, and Songwe bordering Malawi, the statement said. It added that Malawi declared an outbreak of wild poliovirus on February 17 after a case was detected in a young child. WHO Committed to Support North Korea’s Response to COVID-19 Pandemic.

Tanzania was certified as polio-free in 2015, after years without a new polio case, despite a sensitive polio surveillance system, said the statement, adding that due to its sustained high coverage of oral polio vaccines, Tanzania has not detected a polio case since 1996.