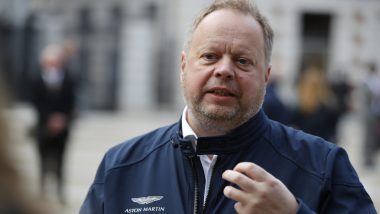 Palmer, who oversaw the company's London stock market float two years ago, agreed to leave on Monday after six years at the wheel, Aston said in a statement.

He is replaced by Tobias Moers, head of Mercedes-AMG, the performance division of German car giant Daimler.

The move comes after Aston clinched a cash injection from Canadian billionaire Lawrence Stroll at the start of 2020.

"The board has determined that now is the time for new leadership to deliver our plans," executive chairman Stroll said in Tuesday's statement.

"All of my and Tobias' energy will be dedicated to building on the company's inherent strengths, its brand, its engineering prowess, and the skills of its people to enable Aston Martin to become one of the pre-eminent luxury car brands in the world."

Moers, who has spent more than a quarter of a century with Daimler, will take up his new post on August 1.

Stroll injected £500 million into Aston in January, a move that saw Aston Martin become a Formula One racing team.

Under the deal, the Racing Point Formula One team -- whose drivers include Lawrence Stroll's son Lance Stroll -- will be rebranded Aston Martin from 2021.

Stroll senior agreed to partly fund the financial lifeline for Aston Martin, whose stellar progress ahead of its 2018 stock market debut crashed spectacularly on weak global demand linked to China's slowdown and Brexit.

(The above story first appeared on LatestLY on May 26, 2020 04:50 PM IST. For more news and updates on politics, world, sports, entertainment and lifestyle, log on to our website latestly.com).