EV maker Tesla has announced the first major redesign of the Model S electric sedan with new exteriors and interiors. The new Model S starts at $79,990 for a "Long Range" dual-motor version that gets 412 miles of range. 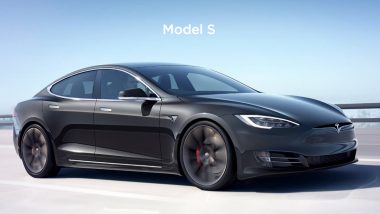 San Francisco, Jan 28: EV maker Tesla has announced the first major redesign of the Model S electric sedan with new exteriors and interiors. According to the company, this new version, which starts shipping in March comes with an option for a more powerful powertrain that lets the car travel at least 520 miles and goes from 0 to 60 miles per hour in under two seconds. Tesla Sues Former Software Engineer for Allegedly Stealing Trade Secrets From Internal Systems: Report.

The new Model S starts at $79,990 for a "Long Range" dual-motor version that gets 412 miles of range. A potential customer can spend $119,000 for one with the new, more powerful "Plaid" powertrain that goes 390 miles with that sub-2 second 0-60 time. The "Plaid+" version with 520 miles starts at $139,000. CEO Elon Musk said on an earnings call Wednesday that Model S Plaid was in production now and will be delivered starting in February.

"It's really a tremendous improvement over the prior version," Musk added.

On the outside, the Model S has a new front bumper with slightly different intakes, a tweaked rear diffuser and new 19- and 21-inch wheel designs. There's a large 17-inch central screen much like that of the Model 3 and Model Y, but the S retains a 12.3-inch digital gauge cluster in front of the driver, as well.

Tesla says the new center screen is basically a gaming computer with 10 teraflops of processing power, and the released images show it running the popular fantasy RPG game Witcher 3. The Model S has three-zone climate control, a 22-speaker audio system, heated seats all around (and ventilated front seats), ambient lighting and a glass roof as standard.

Buyers of the new Model S get a year's Premium Connectivity bundled, with live traffic, satellite view maps, music streaming, internet browser, and video streaming with access to services like Netflix, Hulu, YouTube, and Twitch. Tesla reported that it produced 179,757 vehicles in the fourth quarter of 2020 and 509,737 vehicles in all of 2020. As it hinted in its preliminary update earlier in the month. It also noted that despite delivering nearly 140,000 vehicles in Q4 of 2020, the company just missed its target of 500,000 total deliveries for the year.

(The above story first appeared on LatestLY on Jan 28, 2021 06:55 PM IST. For more news and updates on politics, world, sports, entertainment and lifestyle, log on to our website latestly.com).