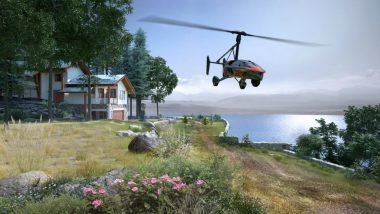 Commuters around the world rejoice. The long-promised age of the flying car is finally here. Dutch company PAL-V International is the organization that finally making it happen! Yes, at the 2018 Geneva Motor Show, the company unveiled the production version of its flying car; the PAL-V Liberty. A three-wheeled, two-seat car and gyroplane’s first look at the major European show in Switzerland surprised the spectators. It is indeed an exciting moment for the company and all flying car fanatics. CEO Robert Dingemanse told the Associated Press, “Flying cars have been in movies many, many times and they will be available next year.”

The PAL-V Liberty is certified to fly under the rules of both the European Aviation Safety Agency (EASA) and the Federal Aviation Administration (FAA) in the United States and complies with road safety regulations too. But you will need a pilot’s licence of course to fly and affluence as reportedly, the pricing starts at around $615,000. The PAL-V Liberty is still under development and the company hopes to hand over the keys to the buyers by 2019. So, now you can choose whether you want to drive or fly to your office.

There are only 90 versions of the PAL-V Liberty.

The PAL-V Liberty is one of the several flying cars around the world that are in development such as The Terrafugia Transition—a folding wing two-seater being developed by the United States based company, Terrafugia and an Electric Vertical Take-Off and Landing Jet developed by a German startup Lilium. The flying cars are not for everybody, but Dingemanse said that he has a plenty of buyers lined up. And like we said, you will have to become certified gyroplane pilots to fly the PAL-V Liberty. The company is also offering training courses. The company further revealed that it can be driven on the roads and will take around five minutes to switch to flying mode.

(The above story first appeared on LatestLY on Mar 07, 2018 01:03 PM IST. For more news and updates on politics, world, sports, entertainment and lifestyle, log on to our website latestly.com).