Paul Prince Aims To Win the World With Sounds of Music

He also weaves nice plots and turns them into novels like "Lost in Europe”. It was to be released in 2020 but the outbreak of COVID-19 did not make it happen. As soon as the spells of the pandemic are over, Paul Prince aims to release it. 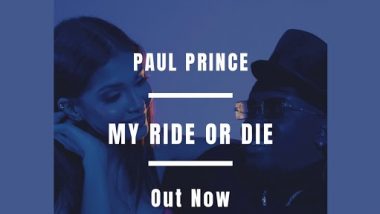 Sounds of music really can miracles. It is more so if the singer is Paul Prince and the number is his latest rhythmic bonanza “My Ride or Die….”

The day of release of this song is very timely as it will hit on Valentine’s Day when the young hearts meet to melt. No suitable occasion could have been found for the release of “My Ride or Die….”

The reason? The reason is that the title of this grand musical experiment “My Ride or Die…” is a common expression blended with sentiment and love that the girls on Valentine’s Day reciprocate with their partners.

“My Ride or Die….”, a brand new type of rap and Hip-Hop, conveyed this sentiment, expression of love and promise to live together till eternity. The lovers of never say die and come what may (?) will like the song very much.

The success of this new number was written the moment it was test-released to a limited audience for their opinions. You may be wondering how is it so? Well, the answer to this question lies in the fact that Paul Prince’s new rap and Hip-Hop “Late Night” released in mid-January and 2 songs in December, were massive successes.

An ideal song to enjoy during a long drive, it took the audience of the world by storm due to its newness, melody, rhythms and lyrics. Hence, it would be no wonder if “My Ride or Die…” creates another musical storm among the audience.

“In My Corner”, another heart-winning album of Paul Prince is also a new type of track. His first single “Pretty Lady” launched in 2017 made him a musical icon almost overnight.

Already a filmy sensation both as a director, producer, scriptwriter and actor since 2016, Paul Prince has also won millions of hearts across the world in his musical way since 2020.

A many-faceted personality, Paul Prince shows his creativities in several areas including story writing, cinema and singing. He is the Co-founder of Jebomedia Inc. Thus, we find him as an entrepreneur also.

He was a dreamer right from his childhood. And we know a successful man in whatever field it may be, has to be a born dreamer. Here, our Paul Prince is!

Yes! He dreamt and still dreams to bring in more new numbers to enthral the music lovers. In his own words: “dreams remain dreams when we sleep, it becomes our reality when we start believing in them and working for them”.

That shows his sincerity to entertain the masses through his songs, unique lyrics and films. Being a dreamer, Paul Prince dreams to bag such awards like Oscar and Grammy. Of course, his fans would like him to win them both, in the days to come.

He also weaves nice plots and turns them into novels like "Lost in Europe”. It was to be released in 2020 but the outbreak of COVID-19 did not make it happen. As soon as the spells of the pandemic are over, Paul Prince aims to release it.