The global rout in stock markets, cryptocurrencies and other risky assets has gathered pace amid growing concern that out-of-control inflation, rising interest rates and slowing growth could combine to tip the world into recession. 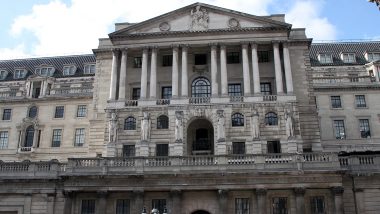 Bank Of England (pic Credit: Wikimedia Commons )
London, June 17:  The global rout in stock markets, cryptocurrencies and other risky assets has gathered pace amid growing concern that out-of-control inflation, rising interest rates and slowing growth could combine to tip the world into recession.

Share prices fell in Asia on Friday at the beginning of what was likely to be another torrid day for investors spooked by the US Federal Reserve's decision this week to raise interest rates by the largest margin for almost 30 years, the Guardian reported. UK Interest Rates Raised to 1.25% by Bank of England to Fight Inflation

Other leading central banks such as the Bank of England and the Swiss National Bank have followed suit, the latter in its first hike for 15 years, sending economists scrambling to revise their forecast for growth downwards.

Stephen Innes at SPI Asset Management in Hong Kong said: "No central bankers worth their weight would put inflation-fighting credentials on the line and import higher energy inflation via a weaker currency."

Despite the Bank of Japan announcing on Friday that it was sticking to its ultra-loose monetary policy, he added the rate rises eleswhere were a "highly ominous signal for stock market investors... the global race to hike rates is nowhere near the finishing line".

Many believe that the US may be in recession by next year, raising the prospect of a wider global slump, the Guardian reported.

Shares in the world's biggest economy have suffered their worst start to a year for 60 years with the S&P 500 benchmark index down 23 per cent since January after losing another 3.25 per cent on Thursday.

Analysts at JP Morgan said the state of the S&P 500 "implies an 85 per cent chance of a recession".

The falls, mirrored on the Dow Jones average, the tech-heavy Nasdaq and UK and European markets, did nothing to boost confidence in Asia Pacific.

The Nikkei in Tokyo was off 1.65 per cent and was on track for its worst week of losses for two years, as was India's main Nifty index.

In Sydney, the ASX200 was down 2 per cent on Friday, The Guardian reported.

The cryptocurrency rout also shows no sign of abating with bitcoin down 7.8 per cent and ethereum 8.45 per cent worse off.

In addition, the Financial Times reported that the Singapore-based crypto hedge fund Three Arrows Capital, which has $10 billion under management, failed to meet margin calls this week amid the slide in crypto values.

(The above story first appeared on LatestLY on Jun 17, 2022 01:37 PM IST. For more news and updates on politics, world, sports, entertainment and lifestyle, log on to our website latestly.com).