Have you watched Priyanka and Parineeti's fun performance on Tip Tip Barsa Pani? 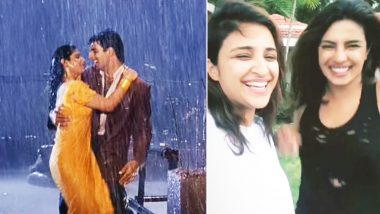 It's all fun and rains for Priyanka Chopra right now! The Bollywood hottie returned to India a few days ago along with boyfriend Nick Jonas. After her housewarming party in Mumbai, the duo headed straight to Goa where they parttied along with the other close friends from Bollywood. Alia Bhatt and Parineeti Chopra were two of PC's closest pals. However, Chopra sisters surprised everyone with their impromptu dance on Akshay Kumar- Raveena Tandon's sizzling 90s track from Tip Tip Barsa Pani (Mohra). That was surely a fun treat to the fans. And you will be thrilled to know that Raveena herself enjoyed the same!

The Maatr actress praised and tweeted to Priyanka Chopra and Parineeti Chopra, "Whoooaaa ! Great job girls ! @priyankachopra and @ParineetiChopra ! PC had told me that “tip tip” was her favourite “makeuptime” song But @republic ?? Cmooon!!! Get it right!" the Ishaqzaade actress instantly replied, "Hahahhaa we love you and tried to be as sexy as you!!"

Hahahhaa we love you and tried to be as sexy as you!! ❤️❤️❤️ @TandonRaveena @priyankachopra https://t.co/VYhPfGfnwr

Akki and Raveena's sexy and melodious track was a rage back in the 90s. Blame it on the catchy music, hot visuals or the undeniably beautiful chemistry between the stars, it still remains one of the best rain songs till date. It was the time when Raveena and Akki were speculated to be dating. The actors moved on in their respective lives but can one forget this musical treat? Also, how can we forget that Akshay and Piggy Chops too were once a thing? Looks like the past is past for both the Bollywood hotties and we love the way they are bonding now!

(The above story first appeared on LatestLY on Jun 27, 2018 12:29 PM IST. For more news and updates on politics, world, sports, entertainment and lifestyle, log on to our website latestly.com).