Jatin Sarna, who plays the late Yashpal Sharma in upcoming cricket drama 83, shares his journey of the film and his love for cricket from getting rejected in the initial audition to bagging the role and being a fanboy of ex-skipper Saurav Ganguly. 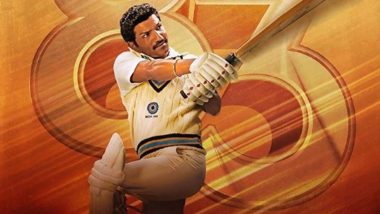 Actor Jatin Sarna, who plays the late Yashpal Sharma in upcoming cricket drama 83, shares his journey of the film and his love for cricket from getting rejected in the initial audition to bagging the role and being a fanboy of ex-skipper Saurav Ganguly. The film 83 is based on the historic 1983 World Cup victory of the Indian cricket team led by Kapil Dev. Ahead of 83’s Release, Kapil Dev Recalls His Experience of Lifting the World Cup for Team India in 1983.

Being a Delhi boy, Jatin had a keen interest in cricket as a child, as he tells IANS: "I was one of those typical youngsters who had a dream of becoming a cricketer because you know, that's the common thing for all of us. I would never miss out on watching any match and I always had this moment after India wins any tough final match, the tears of joy! I was that mad a cricket fan. 83: Ranveer Singh’s Sports Drama on Team India’s 1983 World Victory Declared Tax-Free in Delhi.

"I was a huge Saurav Ganguly fan and I would take out a paper cutting from magazines and newspapers and make my own collection of posters and photos of Ganguly. In fact, I partially stopped watching cricket after Ganguly retired from international cricket and started focusing on acting a little more seriously."

He further added, "I was one of those kids who would never miss big films and important cricket matches. Yes, I was typical like that, cricket and cinema unites India, I am one of those Indians. Thank God I became serious about my acting and feeling so fortunate that playing a cricketer like Yashpal Sharma and that too for a historical moment of Indian cricket - World Cup 1983."

It is interesting to know that Jatin initially gave an audition for the character of Madan Lal and he was rejected for the part. But he shared what happened eventually. He said, "I auditioned for Madan Lal sir's part but was not selected. I was like, its ok, it was just an audition and I missed it. I moved on. Then I got a call from Mukesh (Chhabra, casting director of the film) and he asked me to send a video audition.

Initially, I was like 'phir se kyun bol rahe hai, ek baar kia to tha, hua nahi'. Then I sent another video audition and the next thing I was locked for the film. Later Kabir (Khan, director) told me that earlier another actor was doing the part of Yashpal Sharma. But somehow things did not work out." "When Kabir sir saw the clipping of my earlier audition he asked Mukesh to call me up because he decided to take me for the part. I think I was destined to be part of such an iconic film," shared Jatin who earlier seen in web series 'Sacred Games'.

(The above story first appeared on LatestLY on Dec 22, 2021 03:25 PM IST. For more news and updates on politics, world, sports, entertainment and lifestyle, log on to our website latestly.com).