Aahana Kumra: I Don’t Lose the Opportunity To Do Even a Small Role With a Good Actor 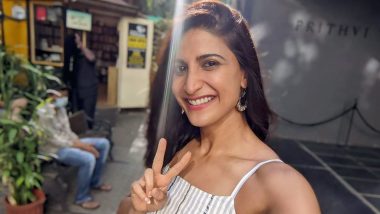 Actress Aahana Kumra stars in Madhur Bhandarkar's next film India Lockdown, and she will also be seen in the short film Happy Birthday with Anupam Kher. She says she never misses out on the chance to work with a good actor, and asserts when it comes to picking a project she never compromises on a good story. Happy Birthday: Anupam Kher Unveils the Poster of His Upcoming Thriller Short Film.

"I have to like the script. If I can do something new with character or work with an interesting actor, it is great. I don't lose the opportunity to do even a small role with a good actor," Aahana tells IANS. She tries to learn using power of observation. "Even if I get one scene with a good actor, I think it is really important. I observe actors like a hawk. I watch everyone on sets and how they transform. We have to keep observing people," she says. Aahana Kumra Talks About Why Actors Like Her Are Getting Their Due in the Digital Space Than in Bollywood.

Aahana is very excited to work with Anupam Kher in the short film Happy Birthday and says that the format of short films is offering good cinema. "When Happy Birthday came to me I was blown away with the script. I didn't know what Anupam sir is doing but felt that a very senior actor must be onboard to play the kind of role he is playing.. I think short film writers are writing really powerful scripts. They are very experimental in that space. If you can tell a story in 20 minutes then nothing like it. I really enjoy working in short script space"

With Covid cases increasing, the shoots in Mumbai has once again been affected. Does she fear lockdown will shut down the industry again? "I am assuming if there are no shoots in Mumbai, they will find ways to shoot elsewhere. Bollywood is a very smart industry. I think it's the smartest industry ever. Locations can be figured out. They will not be flamboyant shoots, there will be more controlled shoots. Wherever I have been shooting, a lot of precautions have been taken."

Aahana is also in awe of her India Lockdown director Madhur Bhandarkar. She says, "I thought he would be very strict on sets because he is such a senior person and he has made such big films.I was so wrong because he has such positive energy and he really keeps the set happy and it shows. He is very collaborative," she says.

(The above story first appeared on LatestLY on Apr 08, 2021 10:31 PM IST. For more news and updates on politics, world, sports, entertainment and lifestyle, log on to our website latestly.com).