Arsenal vs Chelsea, FA Cup 2019-20: Pierre-Emerick Aubameyang, Olivier Giroud And Other Players to Watch Out for Ahead of Final Clash 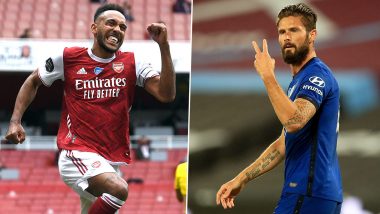 Arsenal and Chelsea are the two finalists of this year’s FA Cup which sets up for a fascinating game of football between two young inexperienced squads. The two London rivals will look to utilise this opportunity as a confidence- building measure ahead of the new season. The Gunners have had instability with a few manager changes this term but Mikel Arteta has been brought in with a long term vision. Chelsea vs Arsenal FA Cup Final 2020: All Our Energy is Going to Be on Winning That Trophy, Says Mikel Arteta.

Chelsea have a better squad in comparison to Arsenal but a lot of credit for that goes to the passing centric football mantra of Frank Lampard. Ahead of the finals, we dive deep into the two teams and bring five players that can have a say in which part of London the FA Cup trophy travels to. ARS vs CHE Dream11 Prediction in FA Cup 2019–20 Final: Tips to Pick Best Team for Arsenal vs Chelsea Football Match.

The former Arsenal striker left the Gunners in search of trophies and will look to punish his former club once again. As a target man, the Frenchman’s hold up play brings the likes of Mason Mount and Christian Pulisic more into the contest. If Chelsea deploys wing-back, his aerial prowess could prove too much for Arsenal to handle.

The young English midfielder scored a world-class free-kick under pressure against Wolves which speaks volumes about his mental strength. Mason Mount has come of age this season for the Blues and it will not be a surprise if he is on the scoresheet against Arsenal or pops up with an assist.

The mercurial David Luiz is a temperamental big game player whose inconsistencies over the years have overshadowed the talent he possesses. He played like a warrior against Manchester City in the semi-finals, keeping their coveted forward line at bay. With Arsenal lacking depth in their backline, it will be down to David Luiz to orchestrate play in defence for the Gunners.

Arsenal will be trying their best to make Dani Ceballos loan move permanent in the summer. The Real Madrid midfielder is an asset to this Arsenal team with the way he makes the side tick. He is a kind of player that looks for movement ahead of him and the front three of Arsenal will hope Dani Ceballos is on top of his game tonight.

Arsenal skipper and probably their most influential player, Pierre Emerick Aubameyang has had another brilliant season in English top-flight football with goals galore. He is one player that can change the course of the game at any movement and in a final match where the defence are often on top, you need big game names like Aubameyang.

Massive game for both these clubs who are in a rebuilding phase of sorts with a trophy doing the young players a world of good as a confidence-boosting measure.

(The above story first appeared on LatestLY on Aug 01, 2020 03:12 PM IST. For more news and updates on politics, world, sports, entertainment and lifestyle, log on to our website latestly.com).