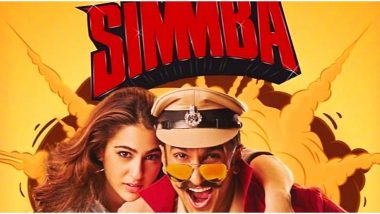 Ajay Devgn's horror-comedy, Golmaal Again has become the first Bollywood movie to re-release in New Zealand post their theatres opening after COVID-19. However, Reliance Entertainment has plans to re-release more of their earlier projects in the international screens and this includes Ranveer Singh's cop drama, Simmba. Reliance Entertainment CEO, Shibashish Sarkar in his interaction with Mumbai Mirror confirmed the development by saying that Simmba will play in Fiji theatres by the end of this weekend. Christopher Nolan’s Tenet and Gal Gadot Starrer Wonder Woman 1984 Release Dates Get Postponed (Read Details).

While the company will obviously earn in additional revenue, Sarkar opines that this is not the time to make money but to offer some support to the struggling theatre chains across the world. "Since there will be a drought of new releases for some time now, with shoots having come to a standstill, there will also be a demand for popular hits that were released earlier,” believes Sarkar. Box Office: Karan Johar's Sooryavanshi and Brahmastra To Be Affected By Backlash Over Sushant Singh Rajput's Demise?

Speaking about their upcoming projects that include some meaty names like Sooryavanshi and '83, Sarkar quips they're looking for new release dates. "We foresee the last quarter, around November-December for our films,” he said. Which further means we can't expect these movies to release in time for Diwali. As Mumbai and Delhi continue to struggle with the rising number of COVID-19 cases, filmmakers and producers have no option but to wait for the situation to normalise. Only then they can afford to release a pan India movie.

(The above story first appeared on LatestLY on Jun 25, 2020 09:56 AM IST. For more news and updates on politics, world, sports, entertainment and lifestyle, log on to our website latestly.com).