The Abhishek Bachchan-starrer crime thriller Bob Biswas is all set to premiere on satellite television on April 30. 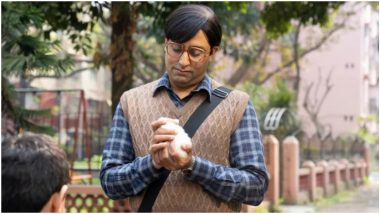 The Abhishek Bachchan-starrer crime thriller Bob Biswas is all set to premiere on satellite television on April 30. The film is a spin-off from the 2012 thriller 'Kahaani' and follows the story of the eponymous character which was played by renowned Bengali actor Saswata Chatterjee in the Vidya Balan-starrer. Talking about the film, Abhishek Bachchan said, "Bob Biswas's character in 'Kahaani' left the audience spellbound with his eerie yet interesting characteristics. When Sujoy approached me with the 'Bob Biswas' script, I had not even seen the film 'Kahaani', thus my perception of the character Bob was limited. However, during the lockdown I watched it and I was truly blown away." Valimai: Ajith Kumar, Kartikeya’s Action Thriller To Have Its World Television Premiere On Zee Telugu Today At This Time!

Taking the direct-to-digital route, the film was released on ZEE5 on December 3. Talking about his director's vision for the character, Abhishek further said, "Our director, Diya's perspective of the character was definitive yet fluid for me to have my creative advances. Bob's character isn't very expressive and being the protagonist there are quite a few subtleties that needed to showcase what a cold-blooded assassin living a normal, middle-class life with his family would look like. I had to absorb the essence of the character to do justice to the audience. It's a character that will keep surprising you through the movie", he added. Indian Version of #ModernLove Premieres on @PrimeVideoIN on May 13! @PritishNandyCom … – Latest Tweet by BINGED.

(The above story first appeared on LatestLY on Apr 25, 2022 07:08 PM IST. For more news and updates on politics, world, sports, entertainment and lifestyle, log on to our website latestly.com).