Bobby Deol On Nepotism: I'm a Bollywood Insider, But My Father Was an Outsider Once Upon a Time!

After making his 'tough' presence felt in 'Class Of 83', Bobby is excited about Prakash Jha's endeavour 'Aashram'. The 51-year-old plays the conman in the garb of a spiritual leader in this web series. 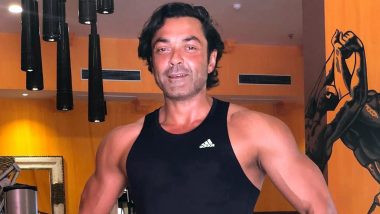 Bobby Deol can't thank his lucky stars enough. The man is on a roll. There was a prolonged lull in his life, professionally speaking, and the actor is emerging out of it to see himself bounce back with the film offers coming his way as indeed the webseries he is seen in. After making his 'tough' presence felt in 'Class Of 83', Bobby is now excited about the veteran director Prakash Jha's endeavour 'Aashram'. The 51-year-old plays the conman in the garb of a spiritual leader in this web series.

In his exclusive conversation with LatestLY, we quizzed Bobby on his take on the nepotism debate that has been raging for quite some time now,.Bobby maintained that he has faced his share of challenges and hurdles in the industry.  "I am an insider (of the film industry,) but my father was an outside once upon a time. He ran away from home, struggled for many years to become an actor and finally he achieved what he wanted. He is a legend in the industry. I believe the hard work one puts in never goes waste. Many people believe that they are not lucky (to succeed in Bollywood) even I believed that for a couple of years in my life. I would get upset, blame others and indulge in self pity." says Bobby. Class of 83: Five Moments That Make Bobby Deol’s Crime Thriller a Sly Tribute to Amitabh Bachchan and Dharmendra’s Sholay (SPOILER ALERT)

" I think you should believe in yourself. You have to have faith in what you want to achieve and have a positive outlook towards life. I was in the right direction but I lost my track and I would always be dependent on something that would pacify me and help me calm down. I think pain, failure and misery can teach you much more than success and fame. In the end, I think one should not give up at all, no matter what!" stresses the 'Soldier' actor. Class of 83: Shah Rukh Khan Shares His Excitement To See Bobby Deol As Dean Vijay Singh In This BTS Video!

Ask him how did he manage to sustain during the lull, and Bobby has no qualms in stating the fact as is. " I had nothing. Something in me snapped when my kids started questioning about my work and what I was  doing in life. I always wanted to become an actor. I never wanted to become a businessman. We Deols are not good at doing business. We are actors. I strive to do well everyday now. One should stay positive and that change in perspective will bring about the transformation needed." adds Bobby.

(The above story first appeared on LatestLY on Sep 02, 2020 02:01 PM IST. For more news and updates on politics, world, sports, entertainment and lifestyle, log on to our website latestly.com).