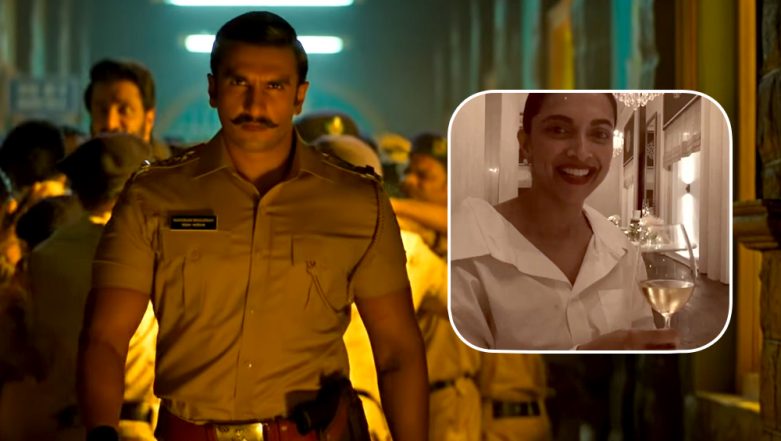 Ranveer Singh and Rohit Shetty worked together for the first time and delivered a power packed performance with Simmba. The film is a box office hit, despite the mixed response it has got. Ranveer Singh- fans have been  vouching for the actor's kickass performance as Sangram "Simmba" Bhalerao, and now, he's got the biggest fan in his own wife- Deepika Padukone! He took to Twitter to share a video of Deepika where she is seen cutely cheering for him where she says, "Aye... aaya police". That's the background score which plays in the movie when Simmba transforms into an efficient and honest cop from a dishonest one. We can't help but wonder how happy Dippy looks while she's cheering for Ranveer in the video. Holding a glass of wine in her hands, wearing a white crisp shirt, Deepika looks pretty hot in this video shared by her hubby dearest. Did Ranveer Singh Just Call Deepika Padukone 'Gharelu'? - Watch Video.

Check it out below-

Deepika and Ranveer have been going overboard with their PDA on social media especially after they got married in November last year, and nope, we ain't complaining. The two recently returned from their honeymoon, where they also celebrated Deepika's birthday together. Ranveer Singh, Ajay Devgn and Akshay Kumar Come Together For an Epic Picture and This is What Rohit Shetty's Cop Universe Will Look Like.

All those who have been wondering if they'd ever get to see their favourite couple on the big screen anytime soon, here's something you need to know. Rumour has it that Kabir Khan's movie on Kapil dev titled '83 might star DP as Ranveer's wife. However, neither the makers nor the couple has yet confirmed the news. As for this video, we think it's the best thing we've seen on the internet today! How about you? Comment below and tell us.