It has been a month since Bollywood lost one of its most versatile actors, Sushant Singh Rajput. The actor died by suicide on June 14, 2020, at his Mumbai’s Bandra residence. 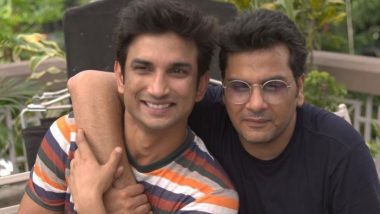 It has been a month since Bollywood lost one of its most versatile actors, Sushant Singh Rajput. The actor died by suicide on June 14, 2020, at his Mumbai’s Bandra residence. From family to industry members to fans, all are still trying to recuperate. One just cannot believe that SSR is no more. Remembering the late actor on his one-month death anniversary, many celebs have shared some memorable moments that they shared with him. One among them is Dil Bechara director Mukesh Chhabra who has shared throwback pics with Sushant from the sets of the upcoming film. RIP Sushant Singh Rajput: Rhea Chakraborty Posts an Emotional Note a Month After Actor's Demise.

Mukesh Chhabra, the popular casting director of Bollywood, would be making his directorial debut with Dil Bechara. This film is a remake of the movie The Fault in Our Stars. Mukesh, shared an emotional note today, remembering the late actor. In it he mentioned how it has been a month since Sushant passed away and there would be no more calls from him. He shared the pics of those wonderful moments that he had with Sushant on the sets of Dil Bechara. RIP Sushant Singh Rajput: Ankita Lokhande Remembers Late Actor a Month After His Demise, Lights a Lamp.

Few days ago, when the title track of Dil Bechara was released, Mukesh Chhabra later dropped a glimpse of the making of the lovely song. While sharing the BTS video, the filmmaker wrote, “Sometimes we can’t let go of memories, becoz they r constant reminders of a great Story that we never expected to end..a glimpse of the hard work n talent of @sushantsinghrajput ..” Dil Bechara is all set to be released on July 31 on Disney+ Hotstar.

(The above story first appeared on LatestLY on Jul 14, 2020 12:04 PM IST. For more news and updates on politics, world, sports, entertainment and lifestyle, log on to our website latestly.com).