Decorating a lamp with white flowers, she lighted up in-front of an idol of Lord Ganesha. 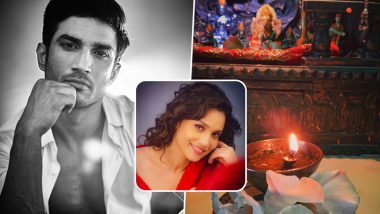 It has been a month since everyone woke up to the devastating news of Sushant Singh Rajput's tragic death on 14 June 2020. The late Bollywood star died by suicide at his Bandra Apartment in Mumbai. The entire entertainment industry and his admirers across the globe were shattered and were in disbelief. While, his death stirred many controversies in the industry, many heartfelt tributes were given to him. His ex-girlfriend and co-star Ankita Lokhande remembered him by lighting a lamp. RIP Sushant Singh Rajput: Rhea Chakraborty Posts an Emotional Note a Month After Actor's Demise.

Decorating a lamp with white flowers, she lighted up in-front of an idol of Lord Ganesha. As she tweeted this picture, the TV star wrote in the caption 'Child of God.' Check out the post below.

Ankita and Sushant worked in TV soap, Pavitra Rishta and were in a committed relationship for six years. Later, they went separate ways personally and professionally and Sushant kick started his Bollywood journey. However, the duo has been cordial post break up as well. She was one of those few industry people who attended Sushant's funeral. The actor's last screen presence will be in Dil Bechara, releasing on 24 July on Disney+ Hotstar.

(The above story first appeared on LatestLY on Jul 14, 2020 10:29 AM IST. For more news and updates on politics, world, sports, entertainment and lifestyle, log on to our website latestly.com).