It was in 2016 when Diljit Dosanjh had made his debut in Bollywood. On the occasion of his birthday, let’s take a look at some of the impressive roles played by him in Hindi films. 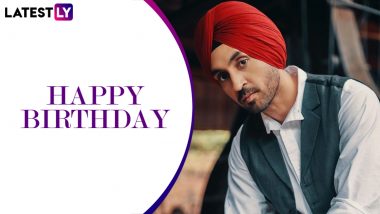 Diljit Dosanjh is a multi-talented celeb, known for his works in Punjabi and Hindi Cinema. He is a singer, songwriter and an actor. He is one of the leading artiste’s in the music industry. Son of Balbir Singh and Sukhwinder Kaur, before starting his career by performing Kirtan at local gurdwaras. Besides being loved for his onscreen work, fans love him for what he does even off screen. Diljit is vocal for all social issues faced by the commoners and his admirers can’t stop praising this wonderful side of him. Diljit Dosanjh And Ali Abbas Zafar To Team Up For A Film On '84 Anti-Sikh Riots?

Talking about his filmography, Diljit Dosanjh started to act first in Punjabi films and some of his projects have become the most successful movies in history. Jatt & Juliet, Jatt & Juliet 2, Punjab 1984, Super Singh, Shadaa, are some of the commercially successful Punjabi films. It was in 2016 when Diljit had made his debut in Bollywood. On the occasion of his birthday, let’s take a look at some of the impressive roles played by him in Hindi films.

Udta Punjab – He portrayed the character of Sartaj Singh in this Abhishek Chaubey directorial. He plays the role of a junior police officer in the narcotics department.

Phillauri – Diljit plays the character Roop Lal ‘Phillauri’, a heartthrob of the village of Phillaur and he is a popular local singer. The actor wins hearts in this light-hearted story with his charming presence.

Soorma – Diljit plays the role of as Sandeep ‘Sunny’ Singh aka Flicker Singh, a young hockey player who is rebellious, and decides to quit this sport (when he was a child) after being punished by his coach who is a strict disciplinarian trainer. But his passion for hockey is reignited after he fell in love with a player named Harpreet (Taapsee Pannu). But things change when he gets accidentally shot ahead of the Hockey World Cup.

Good Newwz – Be it any role, Diljit has aced it with sheer perfection and when it comes to comedy, his comic timing has been impeccable. In this film, we see him as Moni’s (Kiara Advani) husband, Honey Batra. This couple who hails from Chandigarh have taken up IVF, but things go up for toss when sperm mix-up occurs by a reputed fertility centre.

Suraj Pe Mangal Bhari – This film has released amid the pandemic. A light-hearted film in which Diljit is seen as a Sikh dairy business owner, running the business started by his father, trying to find a suitable bride for him and get settled at the earliest.

These are some of the roles played by Diljit Dosanjh and the audiences loved watching him on the big screen. Here’s wishing this brilliant talent a very happy birthday and many more amazing projects in the future.

(The above story first appeared on LatestLY on Jan 06, 2021 12:00 AM IST. For more news and updates on politics, world, sports, entertainment and lifestyle, log on to our website latestly.com).