Diljit Dosanjh And Ali Abbas Zafar To Team Up For A Film On '84 Anti-Sikh Riots?

Diljit Dosanjh who was last seen in Suraj Pe Mangal Bhari, is reportedly going to team up with Ali Abbas Zafar for a film that is '84 anti-Sikh riots. 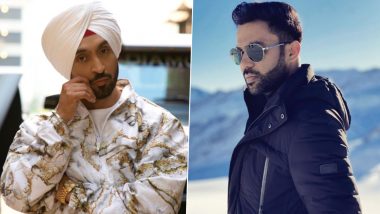 Diljit Dosanjh recently announced that his Punjabi film Jodi is all set to be released in 2021. The film starring Nimrat Khaira was scheduled to be released in June last year, however, it had to be postponed due to the pandemic. The actor-singer who was last seen in Suraj Pe Mangal Bhari, is reportedly going to team up with Ali Abbas Zafar for a film that is '84 anti-Sikh riots also known as the 1984 Sikh Massacre. Diljit Dosanjh Asks Farmers to Be Patient, Hold Peaceful Protests; Requests Govt to Accept Their Demands.

There has been no official update about this collaboration or such a film yet. But a source revealed to Mid-Day, “Since it is a period drama and set in the 80’s, several details had to be incorporated while creating the set, which includes a chawl, and a two-storied building. They plan to roll by January 9.” The source also mentioned, “He (Ali Abbas Zafar) was keen to kick-start the year with this film, and has been personally looking into the set-designing.” Katrina Kaif – Ali Abbas Zafar’s Superhero Film to Be Called ‘Super Soldier’?

Meanwhile, Ali Abbas Zafar also has a superhero project for which Katrina Kaif has been roped in as the leading lady. Rumours are rife that the film will be titled as Super Soldier. Stay tuned for further updates!

(The above story first appeared on LatestLY on Jan 02, 2021 08:28 AM IST. For more news and updates on politics, world, sports, entertainment and lifestyle, log on to our website latestly.com).