Team Doctor G has found its female lead and it is none other than Rakul Preet Singh! This would be the first time that Rakul has been paired opposite Ayushmann Khurrana. 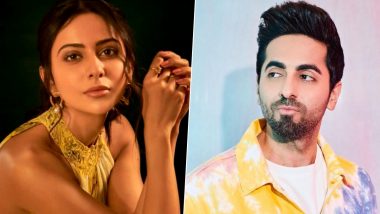 Ayushmann Khurrana, who was last seen in Gulabo Sitabo, is gearing up for his next lined-up projects and one among them is Doctor G, which will be helmed by Anubhuti Kashyap. The team has found its female lead and it is none other than Rakul Preet Singh. This would be the first time that Rakul has been paired opposite Ayushmann. Doctor G: Ayushmann Khurrana Announces New Movie Which Will Be a Campus Drama.

Touted to be a campus comedy drama, Ayushmann Khurrana would be seen playing the role Rakul Preet Singh’s senior as Dr Uday Gupta, whereas the actress would be essaying the role of a medical student named Dr Fatima. Rakul, who is thrilled to be a part of Doctor G, told TOI, “Rakul says, “I’m super excited to be a part of Doctor G. There are many firsts in this film for me, starting with my co-star Ayushmann. I am thankful to Junglee Pictures and director Anubhuti Kashyap for bringing us together. I was in love with the script from the time I heard it. It’s an interesting story, revolving around the medical profession and set in a campus. It will provide a new perspective to the audience. I can’t wait to start shooting for the film.” Hey Ayushmann Khurrana! Gulshan Devaiah Wants to Be Your 'Heroin' in Doctor G!

Doctor G, produced under the banner of Junglee Pictures, is expected go on floors soon. Meanwhile, the other projects lined-up for Rakul Preet Singh include Thank God, Mayday, Attack, Ayalaan, Check and Indian 2.

(The above story first appeared on LatestLY on Feb 01, 2021 09:33 AM IST. For more news and updates on politics, world, sports, entertainment and lifestyle, log on to our website latestly.com).