Earthquake in Delhi: Sonam Kapoor Tweets About Feeling Tremors in the Capital City 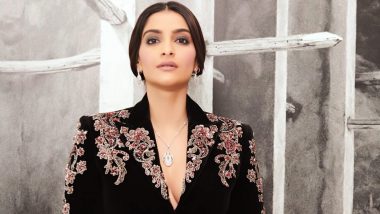 Sonam K Ahuja took to her Twitter handle to share with her followers that she experienced an earthquake in Delhi. The actress is staying at home with her husband Anand Ahuja and their family. She wrote, "Earthquake in Delhi right now," The social media platforms are now busy with the tweets about the Delhi earthquake. As per the National Center for Seismology (NCS), an earthquake with a magnitude of 4.6 on the Richter Scale hit 16 km ESE of Rohtak in Haryana at 21:08 hours today. The epicentre of the tremors was stated to be Rohtak, located in the neighbouring state of Haryana.

This won't be the first earthquake to hit Delhi during the lockdown. It will be the 7th earthquake since April. As per the automatic monitoring of the NCS, between April 12 and May 15 this year, six earthquakes have been recorded in and around the capital, with magnitudes as high as 3.5 and low as 2. An earthquake of magnitude 3.5 was felt on April 12, followed by another one on April 13.

We hope everyone in the capital is safe.

(The above story first appeared on LatestLY on May 29, 2020 09:36 PM IST. For more news and updates on politics, world, sports, entertainment and lifestyle, log on to our website latestly.com).