Friendship Day 2020: From Aamir-Kajol in Ishq to Amitabh-Swini in Cheeni Kum, 6 Most Unlikely Takes on Dosti in Bollywood Films

Bollywood has depleted all the cliched aspects of friendship in abundance. But, has barely scratched the surface of this beautiful relationship. So, today, as we celebrate Friendship Day, allow me to talk about a few of my favourite movies that present us an unlikely take on this silly thing called friendship. 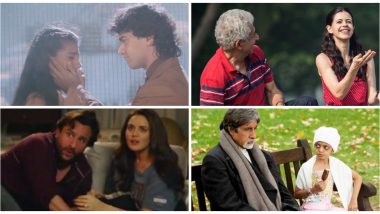 Bollywood loves making movies about friendships. But, agar wo meri sabse achi dost nahi ban sakti to main usse kabhi pyar kar hi nahi sakta. The line has been the motto for Bollywood movies for ages. Or there is a token side character, the best friend, who only exists to make the lead actor look better on screen. Of course, there is also friendship reunion movies (DCH, Veere Di Wedding etc). Bollywood has depleted all the cliched aspects of friendship. But, has barely scratched the surface of this beautiful relationship.

There are so many shades of friendship that Bollywood is yet to explore. For the love of God, I cannot recall one movie talking about friends with benefits. We are also yet to see friends who are not all heterosexual. Zareen Khan and Anshuman Jha will star in a movie, Hum Bhi Akele Tum Bhi Akele, which explores the friendship of a gay man and a lesbian woman. Andaaz Apna Apna has been closest we have come to a movie about frenemies. More of that zinger, please?

So, today, as we celebrate Friendship Day, allow me to talk about a few of my favourite movies that present us an unlikely take on this silly thing called friendship.

Buddhadeb Gupta (Amitabh Bachchan) is 64. Sexy (Swini Khara) is 9. They are the best of friends. This could have turned out to be a very creepy take but somehow director R Balki pulls through. Gupta gets a lot of his sane most advice from the kid, whose story arc is that she is suffering from cancer. The two friends talk about alcohol, relationships and death.

Their friendship also provides emotional depth to Gupta's romantic story with Nina Verma (Tabu). Gupta has an emotional breakdown upon hearing the news about Sexy'sa death and Nina sees the man's vulnerable, emotionally fragile side for the first time.

We do not have many movies exploring a man and a woman's friendship in Bollywood. In fact, we have a saying here 'Ek ladka aur ladki kabhi dost nahi ho sakte'. Circa 1989, Maine Pyaar Kiya, Mohnish Bahl.

But Ek Main Aur Ek Tu, by Shakun Batra, defies those odds. Before Batra made Kapoor and Sons that put him on the map, he directed this underrated gem telling the story of Riana (Kareena Kapoor) and Rahul (Imran Khan).

While, for the most part, the movie seems to be your run of the mill romantic comedy, it is the bittersweet twist in the climax that delivers a dose of reality and you are made to rethink everything you've watched on screen. When Rahul confesses his love for Riana, it is not revealed that she was also always in love with him. She only thinks of him as a friend. SPOILER ALERT, but that's how quite a few love stories turn out to be in real life.

Ishq was an entertaining movie about love and friendship. This 1997 film was as masala as they come - it had romance, comedy, thrill, action, drama and even horror for a good 10 minutes. Richie rich Ajay (Ajay Devgn) is friends with poor Raja (Aamir Khan). Ms Richi Rich Madhu (Juhi Chawla) is friends with Kajal (Kajol), who is just as poor as Raja. Ajay loves Kajal. Madhu loves Raja. Obviously, the parents of the rich brats want them to marry within the status.

The parents' diabolical plan ends the two romantic relationships but makes way for an unlikely friendship between Raja and Kajal. Seriously, we do not talk about it enough. Sticking with each other makes survival easy for the two 'poor' souls dumped by their rich partners. Kajal saves Raja from police brutality, going as far as promising to leave the country and leaving her love behind.

Raja also takes care of a severely depressed Kajal, giving her a space to live.

Shiv (Naseeruddin Shah) and Tara (Kalki Koechlin) meet in the waiting room of a hospital. Their respective significant others are comatose. They bond over the fragility of life and a morbid topic like death. They wait together.

The movie is directed by Anu Menon, whose recent product Shakuntala Devi has hit all the right notes with the audience. Waiting is an underrated film about love, life, death and friendship.

Mihika (Lara Dutta) and Manu (Vinay Pathak) reluctantly take a road trip together. The two belong to different class strata and often clash. There are moments when the two hit it off, but mostly they remain at loggerheads with their class apart approaches to problems they face on road.

Mihika takes some time warming up to Manu. Eventually, friendship blossoms. In the end, Mihika, the elite queen, happily takes a scooter ride in the narrow streets of Old Delhi with Manu. The movie is not a nuanced take on status and class, but is, rather, presents us with an ideal world where these variables would not matter.

This is one of the rarest examples of exes being friends in a Bollywood movie. Unfortunately, this storyline is just a side plot and the makers don't explore it properly. Yudi (Saif Ali Khan) is having issues in his love life, so, for a heart to heart and some sane advice, he lands at the doorstep of his ex Divya (Preity Zinta). It seems from the conversation that Yudi is not doing this for the first time.

The ex-couple argues, laughs and chats the night away. Beautiful.

What Are the Odds - Ashwin and Vivek

Vivek (Yashaswini Dayama) and Ashwin  (Karanvir Malhotra) become friends after a chance encounter. Over the course of their one day of misadventures, they bond over abandonment.

What seems to be an ordinary set up for friendship is made fantastic with whimsical elements. A different way to look at the world. We dive into a fantastical world seen through as seen by the two unlikely friends. Who says it just love at first sight? Sometimes, it is friendship at first sight. Also, Yashwasni and Karanvir look their parts - teenagers - which, believe it or not, is pretty rare in Bollywood.

What is your favourite ODD take on friendship in Bollywood? Our DMs are open on social media. Let us strike a conversation.

(The above story first appeared on LatestLY on Aug 01, 2020 07:49 PM IST. For more news and updates on politics, world, sports, entertainment and lifestyle, log on to our website latestly.com).