Gangubai Kathiawadi Teaser: Netizens Can’t Get Over Alia Bhatt’s Fierce Avatar As the Madam of Kamathipura!

The moment all Alia Bhatt fans have been waiting for is here! As the teaser of her much-awaited film, Gangubai Kathiawadi is finally out. The actress as the godmother of Kamathipura looks super impressive. Here, check out what netizens have to say about Gangu. 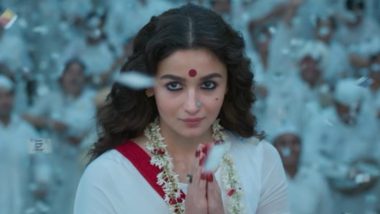 The moment all Alia Bhatt fans have been waiting for is here! As the teaser of her much-awaited film, Gangubai Kathiawadi is finally out. The actress as the godmother of Kamathipura looks super impressive. Right from her style, the lingo, the sex appeal, she is nailing it and how. On the occasion of Sanjay Leela Bhansali's birthday today (Feb 24), the makers unveiled the teaser and also released the date of GK. As soon as the teaser was out, netizens termed the film superhit. Gangubai Kathiawadi Teaser: Is the BGM Score for Alia Bhatt’s Sanjay Leela Bhansali Film Inspired by Marvel’s Black Widow?

Right from talking about the actress' screen presence, dialogue delivery to how she has been a supreme star in all her films until now, Twitterverse is in love with Alia as Gangu. We are sure, just like her previous films, Gangubai Kathiawadi is also going to be a massive hit at the theatres. Apart from Alia, the movie also has a special appearance of Ajay Devgn. Here, check out a few reactions below. Gangubai Kathiawadi Teaser: Alia Bhatt Looks Impressive As the 'Godmother' of Kamathipura (Watch Video).

This is my reaction to the ignorant and jealous people who say "nepotism, famous because of his father, boycott" etc., regardless of Alia's acting 👇🏻 #AliaBhatt #GangubaiKathiawadi #GangubaiKathiawadiTeaser pic.twitter.com/5ZoalKJRUr

#AliaBhatt in teaser of #GangubaiKathiawadi is breath taking in everyway!!! No kangana can even come closer to this level of acting,looks and hardwork.

This is absolutely massss dialogues.

For the unaware, the movie is based on one of the chapters of noted author Hussain Zaidi’s book, Mafia Queens of Mumbai. The film is also a first-time collaboration between Alia and SLB. Gangubai Kathiawadi will make it to the silver screens on 30 July 2021. Stay tuned!

(The above story first appeared on LatestLY on Feb 24, 2021 05:49 PM IST. For more news and updates on politics, world, sports, entertainment and lifestyle, log on to our website latestly.com).