Good Newwz: Akshay Kumar Gets Criticised on Twitter for Abusing Lord Rama in the Second Trailer of his Next

Akshay Kumar comes under the radar of Twitterati after they object to his dialogue from Good Newwz. 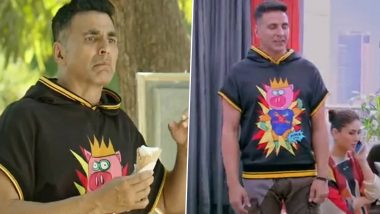 Akshay Kumar is currently under the radar after a particular dialogue of his from Good Newwz gets unwanted attention from Twitterati. Social media is currently exploding with 'Akshay Abuses Lord Rama' trend and going by its reactions we can say, 'Lord Rama' bhakts are mighty unhappy with the Rustom actor. The line in question here can be heard in the film's second trailer that was released only recently. While the writers expected us to take it with a pinch of salt, Hindu fans are clearly not happy with the way they have associated Lord Rama with the unwarranted joke. Good Newwz Trailer 2: Akshay, Kareena, Diljit and Kiara's Surrogacy Drama takes a Comical Turn (Watch Video).

"Dear @akshaykumar you are Canadian citizen and we don’t have problem with it. But how dare you to Abuse Indian religion’s and Hindu gods of India? We indians will not tolerate it at all," tweeted one of the users while sharing his displeasure over the actor's dialogue. The trend is gaining momentum on Twitter and we wonder if Akshay Kumar will decide to react to it or prefer keeping mum. Kareena Kapoor Khan Says She Wants to Be Paid As Much As Akshay Kumar and Here's What Her Good Newwz Co-Star Has to Say!

The Fan is already Threatening to Not Watch it

I will not Good Newwz

Anyone who abuses any religion God

I will never watch that film

His Canadian Citizenship will Cost him a Big Deal

A man coming from foreign country, making fun of our God Sri Ram and some Indians still supports him and idolise him. Once a womaniser always a womaniser, he can never respect anyone, he’s here for money and gains only. Shame

Akshay Kumar - the Worst Thing to Happen in Bollywood?

The Man who’s maintaining clean Deshbhaqt image in disguise but abusing our Idol our Pride Lord Sri Rama through his film for money on the name of entertainment.

RT if you think >>> Akshay kumar is the worst thing ever happened to Bollywood.

Hypocrisy being the Word Here

Where are those Bhakts and Right wing people who attack and start crying on even minute mistake of other Stars...why this hypocrisy in calling out Akshay kumar?just bcoz he shows his fake support to Modi and lick his feet?

People who charge 5rs and 7rs per tweet are trending WE STAND WITH AKKI. but for what?

For abusing Lord rama and lohri festival or for 5rs ??

Shame on such people

Also, considering it's a negative publicity for Karan Johar's new release, we wonder if the filmmaker and his team will decide to omit the scene entirely from the final edit. After the recent online protests against Kartik Aaryan's marital rape joke on Pati Patni aur Woh, Good Newwz seems to be the new victim and makers may decide to either beep it or remove it entirely. Meanwhile, we'll wait for clarification.

(The above story first appeared on LatestLY on Dec 21, 2019 08:42 PM IST. For more news and updates on politics, world, sports, entertainment and lifestyle, log on to our website latestly.com).