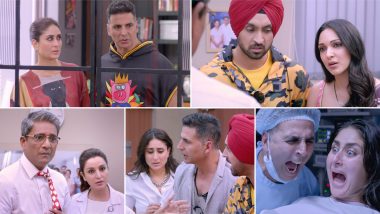 Expect Akshay Kumar, Kareena Kapoor Khan, Diljit Dosanjh and Kiara Advani to end 2019 with a bang. As Good Newwz hits the screens on December 27, you can rest assure that you will end the year on a happy and a comical note. If releasing a trailer followed by the film songs wasn't enough, the makers of this multi-starrer decided to drop in the film's second trailer that's equally hilarious and rollicking. With few additional scenes and character detailing, Good Newwz's second trailer takes our eagerness a notch higher. Kareena Kapoor Khan is Giving Some Bawsy Vibes with a Regal Twist During Good Newwz Promotions (View Pics).

The second trailer promises double the laughter. With two Batras locking horns with each other over their future babies, you can expect the confusion and irritation on sophisticated Kareena and Akshay's part against someone as loud and jolly as Diljit and Kiara. The story revolves around two couples who opt for IVF treatment to bear a child. The process gets messed up when the sperms get interchanged courtesy their similar surnames. What follows next is an emotional rollercoaster filled with laughter, giggles and frustration. Kareena Kapoor Khan Says She Wants to Be Paid As Much As Akshay Kumar and Here's What Her Good Newwz Co-Star Has to Say!

Good Newwz will be the last Bollywood release of this year and its music album so far has been a hit among the masses. With Chandigarh Mein, Sauda Khara Khara and Laal Ghagra, the album promises to be apt for the upcoming party season.

(The above story first appeared on LatestLY on Dec 19, 2019 11:53 AM IST. For more news and updates on politics, world, sports, entertainment and lifestyle, log on to our website latestly.com).